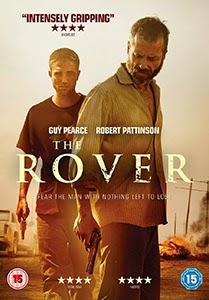 The barren, sun-scorched Australian Outback has proved a fertile creative ground for filmmakers interested in exploring tales of a dystopian nature, and director David Michôd gets great mileage out of it for his second feature, The Rover (2014). Bypassing the inherent high-octane exploitation route of this cinematic lineage, he opts instead for a much more subdued and stripped-down storytelling approach. This runs through the whole of his film, from the sparse dialogue and plotting, to the minimal soundtrack with it’s growling, guttural guitar soundscape. The results offer a gripping and delicately sobering character piece which is further bolstered by outstanding performances from its two leads.

Text on screen introduces us to a world ‘after the collapse’ and this is all we really need to know. Hewn from this desolate setting is Eric (Guy Pearce), an emotionally deadened loner whose stricken gaze and haggard appearance suggests he’s witnessed hell firsthand. A frightening lawlessness has taken hold across the land, where firearms are commonplace and a loose monetary system (only the US dollar seems to hold any weight) is all that stands between a crumbling infrastructure and complete chaos. When Eric has his car unceremoniously stolen by a bunch of low-lives, headed by Henry (the ubiquitous Scoot McNairy) he later discovers the ringleader’s injured brother Rey (Robert Pattinson), who has been left for dead on the roadside.

Patching him up, Eric impassively promises he’ll dispose of Rey once he has helped led him to his brother. The young man seems to casually acquiesce to this and the two set out to retrieve Eric’s motor. A large part of The Rover‘s appeal stems from Michôd refraining from adding anything in the way of backstory or explanation into the catastrophic chain of events which have caused the devastation. The director instead drip-feeds the audience small but revealing details about the characters and the fractured world they inhabit. He takes two well-established cinematic devices (the odd couple and the road movie) and uses them to thoughtful and nuanced effect, getting the very best from his actors.

Pearce has never been better as the haunted and disturbed protagonist, but it’s Pattinson who almost steals the show. Saddled with a thick and garbled Southern US brogue, he completely loses himself within the role, and even if he’s little more than a slow-witted hick, Pattinson’s performance manages to invoke sympathy from the audience, even when things take a decidedly dark turn. An indelible jaunt into the heart of darkness, Michôd has fashioned an very worthy follow-up to Animal Kingdom (2010). The Rover is a bleak and downbeat endeavour, yet it’s also an extremely rewarding and ultimately moving one.