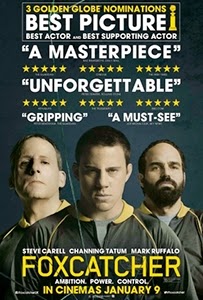 When Barton Fink was asked to write a wrestling picture, it struck him as the most demeaning use of his talents. He wished to commit to his political principles, and to the people. With Bennett Miller’s Foxcatcher (2014), we have a film which, despite devoting significant screentime to the sport of large men in tights, has as its main theme the absolutely corrosive effect of too much money on just about everything. Based on a remarkable true story and set in the mid-eighties, Miller’s film follows his earlier Moneyball (2011) in revealing the backrooms of sport away from the arena, and his narrative debut Capote (2005) (written by Foxcatcher scribe Dan Futterman), another ‘true crime’ story.

Channing Tatum is Mark Schultz, a good-natured lunk who lives in a barren apartment, struggles to make ends meet and trains with his brother, Dave (Mark Ruffalo), in pursuance of his career in wrestling. His devotion to the sport seems to pay off when he’s invited to the massive estate of John du Pont (Steve Carell), one of the wealthiest men in America at the time. Here, he’s effectively wooed by du Pont who professes a keen interest in the sport and a wish to help Mark and Dave, providing them with money and training facilities at Foxcatcher Farm. Mark is overwhelmed and devotes himself to proving himself worthy. However, Dave is his own man. “You can’t buy Dave,” Mark tells du Pont, whose blank look of bafflement at the notion is a sign of his belief in his own entitlement and a foreshadowing of the conflict to come.

As time goes by, however, du Pont’s grooming of Mark in the beautiful grounds of his opulent manor and his insatiable need to win approval and control sees him call Dave in, so that together they can train Mark for the Olympics. Trouble is brewing as Mark begins to resent both his brother’s success and his patron’s influence. Dave is willing to accept things for the moment, but he too see through du Pont in a way his brother is only beginning to realise. Carell, in a rare but not unique departure into drama, proves himself as accomplished at tragedy as he is at comedy. Almost unrecognisable in a fake nose and with a set of decidedly un-American teeth, Carell’s du Pont isn’t even a million miles away from the self-delusion of amiable nitwit Michael Scott in the Stateside version of British comedy The Office.

“I’m an ornithologist and a patriot,” Carell’s trumpet-blower utters. It’s funny, but there’s also something sinister to it, reminiscent of that other movie ornithologist Norman Bates. Du Pont aspires to be a mentor and a leader while possessing none of the necessary virtues, his speechifying and pretensions fuelled by his relationship with his mother (Vanessa Redgrave) and facilitated by his vast wealth. His influence corrupts Mark as he both befriends and bullies him, seeking to twist him into a version of himself even as he dresses up in a tracksuit and begins himself to train as wrestler. In fact, they’re both manchildren – du Pont plays soldiers, even buying his own tank – but the differences are partly economic and partly due to the fact that Mark has Dave and du Pont has only his disapproving mother (Psycho again), who pesters him about getting rid of his train set and derides wrestling as a “low sport”. Furthermore, Tatum’s Mark could easily have been just a dumb jock, but his turn is far more nuanced (there’s more than a little ‘lost boy’ about him).

However, despite these two stellar performances, it’s Ruffalo who ultimately steals the film. His Dave is a warm, perceptive man who loves his brother, his children and his wife. He’s also a genuine mentor. Whereas du Pont never opens a door for himself, Dave is forever fixing things and teaching moves. A penned reminder on the back of his hand tells Dave to “PU KIDS”. Ruffalo’s real-life political activism also arguably informs his role, as a working-class Joe stands in opposition to Carell’s Mr. Potter-like need to own and control everything. Money is the ultimate villain, poisoning du Pont with the logic that he can literally get away with murder. He’s surrounded by servants and yes men, and is allowed to inflate his own self-important ego. His wrestling matches are fixed, and du Pont even finances documentaries about his ‘noble’ work. Interviewed for one of these documentaries, Dave is coached into praising du Pont as his own mentor; watching him choke on the words is heartbreaking, lifting Miller’s Foxcatcher to a whole new emotional plain.

This review was originally published in May 2014 as part of our Cannes Film Festival coverage.