The opening moments of Nick Broomfield’s Oscar long-listed documentary, Tales of the Grim Sleeper (2014), call to mind the narrative inspiration for recent podcast, Serial. Pitching up in South Central L.A. in search of the story behind the eponymous serial killer, Broomfield is met with strident claims that the man awaiting trial has been wrongly accused. The stage seems set for an investigation into innocence, but instead morphs to become a gripping exposure of institutional culpability. Broomfield’s expert focus widens from the killer, Lonnie Franklin Jr., to a compelling study of the sociological factors that allowed him to remain at large for so long. 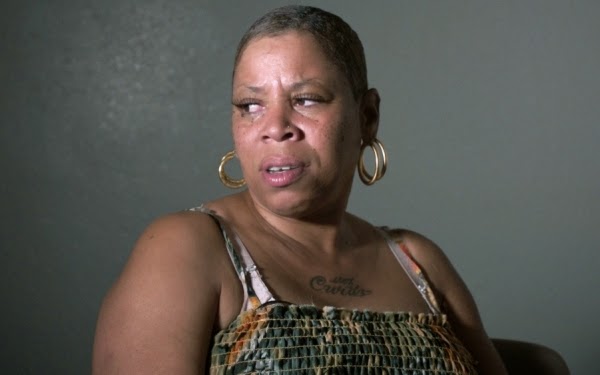 Franklin’s charge was for ten murders spread across the course of two decades, but several hundred dirty photographs found in his possession when arrested raise far more chilling possibilities. One would be forgiven for wondering how it could be possible for a number of victims, into triple figures, to disappear without greater public outcry. When the introduction of the horrific police term ‘N.H.I.’, the matter becomes as clear as it is distressing. The acronym stands for ‘No Human Involved’ and was a sickening phrase referring to crimes in which the victims were prostitutes, drug addicts, or one of many other forms of “undesirables” – often made even more so by the colour of their skin. As one interviewee suggests, some police officers saw these deaths as a form of public service.

Given Broomfield’s form in this area – he’s the man after all who has made two documentaries on Eileen Wuornas – it’s hardly surprising that he manages to illicit so much from the inhabitants of Franklin’s former neighbourhood. The persona he adopts is of an inquisitive Brit, oblivious to what he is uncovering, thus disarming those he speaks to. After hollering insults at him from their front porch – “peckerwood!” – three close friends of the accused acquiesce to a combined interview in which they protest his innocence. Each then returns to Broomfield’s welcoming camera to confide observations of Franklin that seemed innocuous at the time, but take on more startling dimensions in hindsight. More shocking – to both audience and filmmaker – are the testimonies that recall blood-spattered women’s clothing or the dark stains, mistaken for oil, cleaned from the carpets in his van. These are the film’s doorway to sharper and more penetrating critique of the apathy both towards and within this community and many like it.

The antithesis of that mood is Pamela Brookes – a four-years-sober former “crack whore” – who is a shining light in the darkness. She travels around with Broomfield and his crew in their car acting as their key to unlocking the women on the streets. They in turn describe their experiences with Franklin. At one point the filmmaker asserts that she has taken over the production management as she strives to give a voice to those that this merciless killer targeted. The police had long given up on attempting to identify and locate any of the women in Franklin’s sordid gallery but Pamela refuses to back down. The result is a urgent plea not only on behalf of this disenfranchised and disregarded community, but the vulnerable people ignored and deplored by the institutions supposed to protect them. The dark recesses of a diseased mind may make the headline, but it is the indictment of far more widespread infection that rings out and is striking in its prescience.