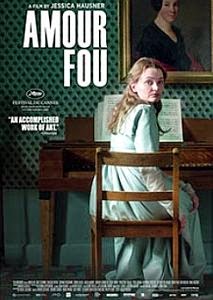 Jessica Hausner’s Amour Fou (2014) has enjoyed considerable praise since it premiered in the Un Certain Regard section back at the Cannes Film Festival last May and is a quietly effective denunciation of the idea of dying for love. It’s a reserved period piece, but as with her brilliant Lourdes (2009) it’s Hausner’s restraint that ends up imbuing her argument with power. We meet German romantic writer Heinrich von Kleist (Christian Friedel, who audiences may recognise from fellow Austrian filmmaker Michael Haneke’s Palme d’Or-winning The White Ribbon) as a young, melancholy poet more than a little in love with the notion of death.

Rather than concentrate on his woes, Hausner takes as her central focus Henriette Vogel (Birte Schnoeink), the woman who he tries to convince to commit a double suicide with him. Vogel is a conventional woman, married to a tall civil servant and blessed with a daughter with whom she sings duets and whose only flaw is that she occasionally feeds the family dog from the table – to no greater reproof than a couple of tuts. She has no ambitions at all, in fact apparently despising them. During a discussion about freedom, she complacently declares that she is her husband’s property and wouldn’t dream of seeking freedom. Likewise, she pities a famous opera singer who gives a recital she attends. Where others might see glamour, Henriette sees only exposure to the public gaze and possible scorn.

Heinrich, on the other hand, is constantly out of sorts. The conservative Prussian drawing rooms pain him with their indignant conversations about the freeing of the serfs and the implementation of new taxation on the rich. Not that he proves himself much of a revolutionary; his concerns are more wrapped up in his own sulky philosophising. Despite his pretensions to depth and intellectual superiority, Heinrich’s superficiality is revealed in his initial seduction of Marie, his cousin (Sandra Hueller). She toys with the idea before quite sensibly brushing him off for a better offer of a trip to Paris and marriage to someone who doesn’t believe in self-murder as the ultimate expression of affection. “You’re right. Everything is meaningless and people are cruel, but you mustn’t let it bother you so much,” she admonishes. But Heinrich isn’t one for taking advice. Indeed, he’s the proof of Goethe’s warning that unhappy men are dangerous. Initially, Henriette is impervious to Heinrich’s charms, but slowly begins to lend him her ear.

The situation that becomes genuinely dangerous when she is diagnosed as have a danger tumour, or ulcer, and only a short time to live. Heinrich is vaguely pitiable: he’s a prig, interested only in an abstract ‘love’ and not for instance having sex. He is punctilious in observing social niceties and even when he argues with a friend his passion is expressed in a clipped leave taking. That said, Heinrich is not the only guilty party. Herr Vogel (Stephan Grossmann), in allowing his wife to take a lover in order to improve her happiness, is partly if unwittingly at fault. Likewise, the medical establishment don’t cover themselves in glory with a number of faulty diagnoses based on nothing, whilst the aristocratic families are also seen as being complacently unfeeling, bluntly refusing to accept the changing times around them. Hausner’s tactful camera rarely moves, capturing still lives of perfect minimalist composition. The tragedy of Amour Fou is of the quiet variety, and it’s one which Hausner has pitched almost perfectly.

This review was originally published in May 2014 as part of our coverage of the 67th Cannes Film Festival.