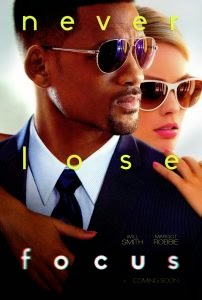 Heist movies are meant to be sexy and slick, where the underdog comes out on top thanks to their cunning and skill. Immediately we think of the sparkling smile of Robert Redford in 1973’s The Sting, the undeniable charm of Clooney’s Danny Ocean or the tenacity of De Niro’s Neil McCauley. However, with Glenn Ficarra and John Requa’s Focus (2015), starring Will Smith as cock-sure conman, feels like a limp imitation. Focus glides along too comfortably, far more interested in the authenticity of the terminology and on the practicalities of street level swindles. It might be accurate, but it’s at the expensive of structure and is too wrapped up in the idea of conning the audience, culminating in underwhelming grand reveal.

In the first half of Focus, there isn’t a single heist. Instead, they are small purse snatches and wallet lifts from everyday Joe’s. Watching the action unfold is not dissimilar to watching Derren Brown or David Blaine show. The set up is simple, a master and apprentice story, where Smith plays a canon, a top-dog in the world of thievery, while Margot Robbie plays his attractive apprentice Jess. The pair possesses good on-screen chemistry. They bicker and quip, parading around glamorous high-end hotels and clubs, and the sizzling heat of New Orleans in high summer before jetting of south of the border to Buenos Aires. Ficarra and Requa want to keep us guessing whether the duo is playing each other or in love. Ultimately, the biggest con in the movie is the one the directors are playing on their audience.

It’s a smart idea and would have been great had they pulled it off. Disappointingly they are so concerned with this trick that they allow the structure and plotting of the film to fall by the wayside. That isn’t to say there aren’t enjoyable elements. Xavier Grobet’s camerawork is good-looking (just like the cast) and the slick R’n’B heavy score, featuring tunes such as Please! from Edward Sharpe and the Magnetic Zeros and Bruno Hovart’s I A Manchild, make the film feel glamorous and sexy. More problematic is how the film is drastically cut in half. The first half of the film is far more entertaining. We see teams of crooks weave through carnival crowds stealing watches, purses and whatever they can lay their hands on. The second half is a mess, where the ‘big heist’ we have been waiting for gets swamped in a relationship drama.

It’s easy to see why Smith was cast as Nicky. He is well-known for possessing charisma and charm, and can often elevate the most tiresome of mainstream drivel into something watchable. He is good value in Focus, possessing the right level of cockiness and swagger. Equally, Robbie plays the stunning blonde with panache, and together they make the movie a passable watch. Misdirection and mis-direction are the central problems with Focus, which is an ironic title if ever there was one. It never gets going in terms of suspense. Instead, we are left with the romantic storyline between Smith and Robbie, as to whether they will get together in the end. This is so-so, despite the stars obvious on-screen chemistry. You are left feeling there should have been more, a grander reveal, and a smarter twist, instead it leaves you feeling you just had your wallet and your time stolen.