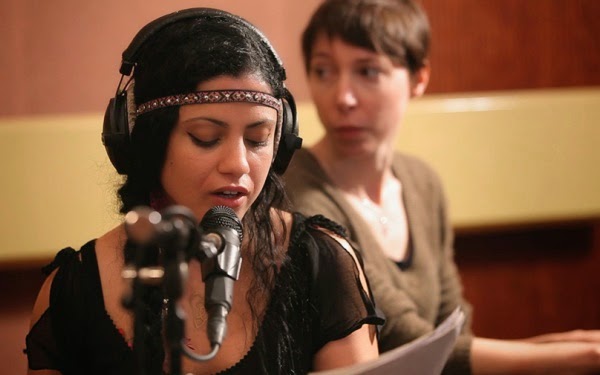 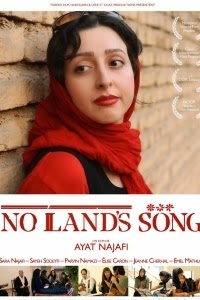 Ayat Najafi’s enthralling doc No Land’s Song (2014) is about his sister Sara’s attempts to stage a concert in Tehran featuring female soloists. Following the Islamic revolution of 1979 female singers were banned from performing solo in public, unless to an exclusively female audience. Iran has a history of iconic female singers, such as Qamar al- Molouk Vaziri, Delkash and Googoosh. Now their recordings are only available on the black market. Sara – a composer – and her friends feel keenly the loss of the female voice in Iran. Sara decide to plan a public concert of Persian music with singers Parvin Namazi and Sayeh Sodeyfi.

She enlists the help of two French female soloists Élise Caron and Jeanne Cherhal and Emel Mathlouthi, a Tunisian singer-songwriter known for her protest songs. Sara presents the project to the authorities as an opportunity to rebuild cultural bridges between France and Iran. In his feature debut, Germany based-Najafi accompanies his sister on a sometimes labyrinthine journey. She visits a traditional tea shop and one man recalls the pre-Revolution cabarets and music clubs where women once drank alcohol and sang freely. Whenever she attends the Ministry of Culture and Islamic Guidance there is a blackout. Sara clandestinely records the increasingly surreal conversations. Most telling of all is her interview with a religious scholar to ask why women can’t sing solo in front of a male audience any more.

He tells her “No decent man sitting in public and listening to music should get sexually aroused. He mustn’t deviate from his normal condition.” These episodes are in stark contrast to the light and colour of her Paris visits. The French musicians Sara works with are by turn excited and frustrated by the bureaucracy of the state and its indecision about granting them visas and whether the concert can go ahead. Eventually, in 2013, the authorities decide that the foreign musicians can come to Tehran but, fearful of another Green Wave (uprising), the concert is postponed until after the presidential elections in June. When the musicians finally arrive in September, the authorities again get cold feet after Emel posts an incautious message on Facebook. Sara receives complaints that the women’s voices are too loud in rehearsal and that they aren’t taking proper care with their hijabs. Made in partnership with Al Jazeera English and TV5 Monde, No Land’s Song is a provocative and compelling film about fighting repression and injustice with music – the featured songs are about hope, freedom and rebellion. It speaks volumes about the treatment of women and freedom of expression in Iran today and is both entertaining and profoundly moving.