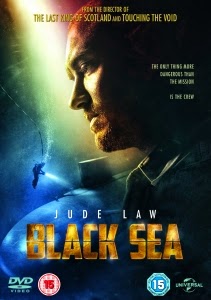 The crushing weight of blue collar existence is as pivotal as that of the surrounding salty brine in Kevin MacDonald’s nautically inclined thriller, Black Sea (2014). It’s neither black nor blue that proves the insidious engine of this particular submarine voyage though; it’s gold, in the form of millions-worth of long lost bullion. Flying in the face of genre convention, the submergible setting is largely stripped of its typical combat trappings and cat-and-mouse depth charge scenarios, in favour of claustrophobic tension. It makes for an intermittently gripping watch, coloured with dangerous greed and the destructive force of pride on those mangled in the machinery of faceless corporations. 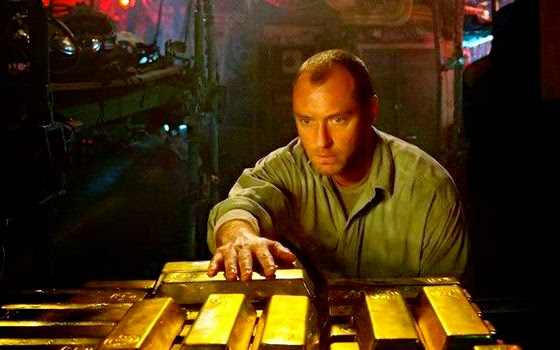 It’s Jude Law’s protagonist and pilot, Robinson, who carries the largest chip on his shoulder. Laid off by a salvage company, he’s forced to take on a risky venture that sees him assembling a motley international crew and setting off in search of a sunken Nazi U-boat. A foreboding title sequence plays up the Second World War angle – and of fascist regimes – but reading any relevance other than narrative context would be forcing an allegorical subtext that isn’t there. Even the purported danger of a surface-dwelling military adversary is notional and an excuse to remain beneath the waves. Black Sea is principally about the dozen or so men who have batten down the hatches, and the effect this has on their collective psyches in the face of confinement, limited oxygen and a life of subordination.

Their enclosure is well constructed through the choices of MacDonald and his cinematographer, Christopher Ross, whose every frame seems to either dirty the lines with something obstructing the view in the foreground, or squeezes in the ceiling. There’s little space and their camera lingers, often on hands as they touch the dated technology or paper charts; it lends the surroundings a tactile quality that only acts to bring the walls a little closer. Not aiding the situation are the fraying nerves of the men including the likes of Michael Smiley, Scoot McNairy, Grigoriy Dobrygin, and David Threlfall – not to mention the scene-stealing livewire Ben Mendelsohn as deep sea diver, Fraser. He is by far the most interesting character with Law’s captain, furnished with a wavering Scottish accent yet hamstrung by awful prelapsarian flashbacks.

Fraser, in fact, provides much of the narrative cut and thrust in a wild-eyed performance that, along with Law’s determined captain, most evidently portrays the breached hulls of these aged sea dogs. It is not just the characters themselves that suffer from cracks, tough, with the plot on occasion lurching around more wildly than the vessel. Certain sequences are handled exceptionally – an attempt to guide the sub through an underwater ravine is the closest the film gets to traditional stomach-churning threat – but others feel overblown and some characters underwhelm. That’s not to say that Black Sea is not an enjoyable – and at times, enthralling – aquatic adventure, it just never quite thrills as much as it spills, and flounders during some of its more emotional beats.