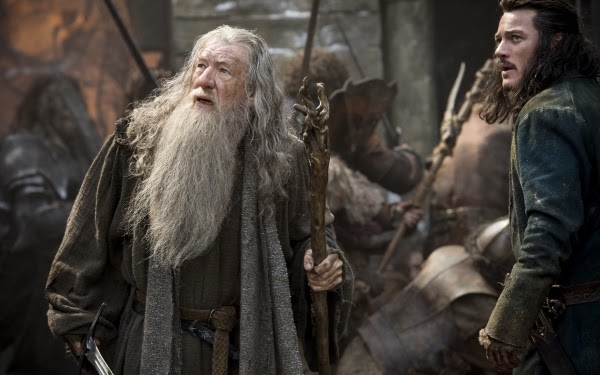 Thirteen years on from the release of The Fellowship of the Ring, Peter Jackson completes his journey through Middle Earth with action-packed and satisfying finale, The Hobbit: The Battle of the Five Armies (2014). Proceedings open in the depths of night in Lake Town in the midst of chaos; the town’s inhabitants scream and panic as the dragon Smaug (Benedict Cumberbatch) looms overhead, belching fire. Jackson spends no time recapping the events of the previous chapter, preferring to get audiences’ hearts racing with a sky-high duel between the barrel-toned fire-drake and Bard (Luke Evans) who, whilst doing his best Strider impression, stumbles through a plethora of dud lines.

Back atop their ancient mountain stronghold of Erebor the dwarves, led by Thorin Oakenshield (British actor Richard Armitage), stare down on the destruction in the town below. Since reclaiming their subterranean kingdom, Thorin has become possessed with “dragon sickness” – which is in essence a madness in the mold of Denethor – causing him to abandon all sense of honour in his quest to reclaim the Arkenstone. In a pleasing touch, Armitage’s voice echoes that of Smaug and even a touch of Gollum, consumed with protecting his endless fields of gold. It’s Armitage’s performance, encompassing themes explored in Jackson’s first trilogy, that elevates this final adventure. The same can be said of the return of Martin Freeman as Bilbo Baggins, who provides the tale with its diminutive moral core.

When allowed quiet in which to breathe, the pair exercise their acting chops to great effect, even though Freeman seemingly has little screen time. These moments cut through all the impressive technical wizardry and baggy subplots to the very heart of the story. For the most part, however, the focus is upon creating a whirlwind of sword swinging and orc-bashing – the ongoing battle involving every race of Middle Earth is a spectacle to behold. Armour-clad dwarves sit astride bristly war-hogs and cliff-hoping battle-rams and a few familiar faces joining together in an Avengers of Middle Earth action-sequence that, whilst visually dazzling, appears to only serve the purpose of linking the plot to The Lord of the Rings. There is, in fact, a great deal of structural similarity to The Return Of The King (2003), not least in a seemly never-ending series of battles and climaxes.

Somehow it seems churlish to attack the film for being too action-packed when it bears the title The Battle Of The Five Armies. One of the most entertaining and touching moments come at the conclusion of the film and for fans this will be warmly received like an open fire in Bag End after a trip to Mount Doom. The six films tot up to nearly twenty hours (by Shire reckoning) and it is impossible not to admire and appreciate the world Jackson has so carefully and lovingly, lifted from Tolkien’s tomes. Jackson’s efforts have peaked and troughed, but this final chapter will undoubtedly satisfy fans, and kindle a sense of sadness as this hobbit’s tale finally draws to a close

The Hobbit and LOTR films were cinematic achievements in part due to the incredible sets that were built and used in the films. Reviews of the set design and construction would impress any Home Advisor professional builder. In LOTR the impressive set for Helm’s Deep was built and then torn down to accommodate the set for Minas Tirith. Such a tough job would give Home Advisor Reviews of the construction crew top marks for efficiency and time management.