A moving and sobering tale of the fight against prejudice and the quest for acceptance in the face of adversity, Katherine Fairfax Wright and Malika Zouhali-Worrall’s doc Call Me Kuchu (2012) is almost structured like a fiction feature, with a final devastating third act which brings little closure or cause for celebration. While there are still instances of unjust treatment towards same-sex relationships in the UK, the bigoted, hateful ideology on display in Uganda is reminiscent of a dark, barbaric age. The LGBT community suffer regular humiliation from the police, and have to contend with the potentially lethal consequences of their lifestyle choices. 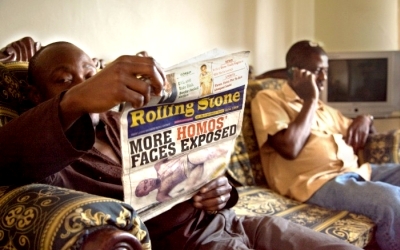 Initially, the film’s narrative focuses on a court case brought about by the country’s Stonewall equivalent – Sexual Minorities Uganda (SMUG) and their fight against Ugandan newspaper, Rolling Stone. It’s an abhorrent rag (which makes The Daily Mail look like a restrained and considerate publication, by comparison), charged with a serious infringement of human rights as it brazenly ‘outs’ local gays and lesbians by printing pictures of them, along with their personal details, intended to name and shame those caught on camera. At the head of this campaign against the tabloid stands one David Kato, an advocacy officer for SMUG and someone who has devoted his life to fighting for equality.

Filmmakers Wright and Zouhali-Worrall offer a superb portrayal of a brave and fearless figure, whilst we’re also introduced to his circle of friends, many of whom have stories of abuse and suffering which are equally heartbreaking and horribly unjust. An utterly tragic turn of events occurs when, three weeks after the landmark legal victory against the paper, Kato is brutally murdered. Remarkably, and to the directing duo’s great credit, Call Me Kuchu doesn’t transform into the maudlin tale of loss it so easily could have become. Kato’s death is used to reinforce the impact of a potentially devastating bill which threatens to make homosexuality punishable by death.

While the incidents in the film made world news, Call Me Kuchu still feels like an intimate story – a good fit for the small screen. There’s a matter-of-fact tone to proceedings, and the only occasion where it feels like the makers embellish events to work in a little cinematic sheen comes with the after-party celebrations which follow the court ruling. Due to the terrible twist, these scenes end up resonating much more than originally anticipated – it’s not difficult to be both stirred and enraged upon viewing this thoughtfully-crafted documentary.