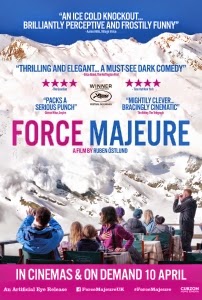 The awkward skirmishes of a growing marital rift are the thrust of Ruben Östlund’s hilarious and deadpan Swedish satire Force Majeure (2014). Snow-laden peaks are often the setting for cinematic peril and disaster, but in Östlund’s latest – which understandably picked up the Un Certain Regard Jury Prize at last year’s Cannes Film Festival – the director is far more concerned with travails on the inside of a pinewood ski resort than the surrounding slopes. A filmmaker interested in perception and characters’ fears of judgement for their actions, he navigates familiar terrain with impeccable precision, sending up a well-heeled family as resentment is fostered during a vacation. 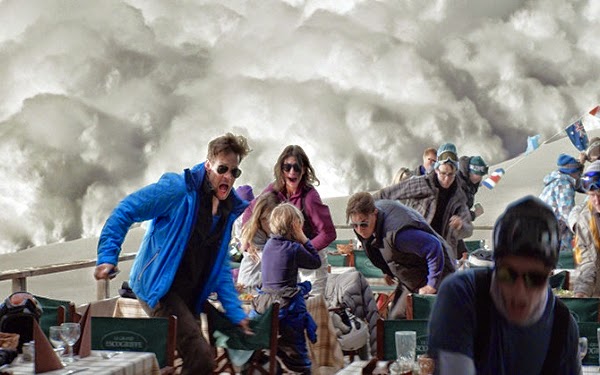 Set across the four supposedly glorious days of a holiday, Force Majeure sees married couple Tomas (Johannes Kuhnke), Ebba (Lisa Loven Kongsli) and their two children – a boy and a girl (pictured right) planning some quality time away from work emails. The atmosphere during the first day is already somewhat taut, but events take a turn for the excruciating during an open air brunch the next morning. A controlled explosion seems to have started a full-scale avalanche the family are put in direct peril, but when panic sets in, Tomas grabs his phone and scarpers, leaving Ebba and the children to fend for themselves. Although it transpires to have been a false alarm, and nothing worse than a light layer of snow dust envelopes them, the couple must now both reconcile themselves with Tomas’ actions.

After a banal period of scene-setting, from the unfortunate incident onwards Östlund takes pains to tighten the atmosphere exponentially – his cinematographer Fredrik Wenzel frames the couple in exposing two-shots whenever possible, allowing neither of them any place to hide. It’s like Michael Haneke does cringe-comedy as Ebba’s vexation escalates when Tomas refuses to admit the nature of his actions; two separate dinner dates end in uncomfortable bickering. Every day concludes with a recurring shot of the couple brushing their teeth in the mirror, and with each instance the animosity between them grows. The two leads are both exceptional in their roles, given really interesting developed characters to inhabit. Where the majority of the acting is naturalistic in keeping with the general aesthetic, they both also get moments to go overboard and heighten the audience’s stress levels or have them guffawing in disbelief.

Both the bourgeoisie and ideas of masculinity are placed under the exacting microscope here, but the female players are also examined and Ebba is granted a moment of fantastically funny hypocrisy at the denouement. It would potentially be possible to view Östlund’s Glasgow Film Festival offering as a straight drama in which it would remain gripping and deftly observed. As Vivaldi’s Four Seasons echoes across the piste, Force Majeure is a gripping and deftly observed drama that adds caustic condemnation through its embracing of humour.

This review was originally published in September 2014 as part of our Toronto International Film Festival coverage.