“Believe nothing you hear and one half of what you see”, is a line lifted from Edgar Alan Poe’s The System of Doctor Tarr and Professor Fether that is uttered by a plummy-toned Brendan Gleeson at the opening of Brad Anderson’s entertaining Grand Guignol genre-piece Stonehearst Asylum (2014) (previously Eliza Graves). Based on Poe’s book, the story opens at the beginning of the last century, where a naive young doctor, Edward Newgate (Jim Sturgess), embarks on his first position at a remote asylum in the wilderness of North Yorkshire. Upon his arrival, he is greeted by the institutes head shrink, the archly named Silas Lamb (Ben Kinsley). 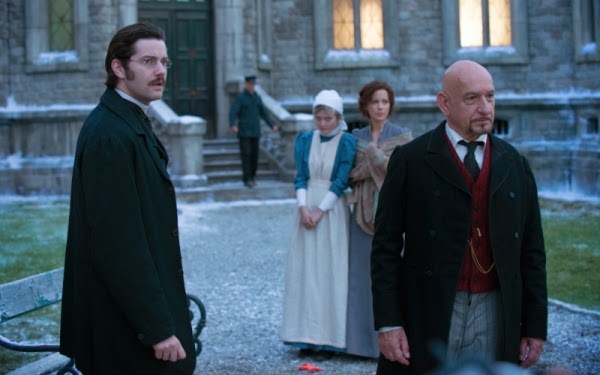 He offers Newgate a tour of the gothic building, showing off his unorthodox methods of treatment. It is quickly revealed that that the Institute has undergone a horrific change, where the residents have imprisoned the staff and taken over, lead by the menacing Lamb and his henchman, Mickey Finn (David Thewlis). Poe’s original story was written in the wake of a crisis over the barbaric treatment of the mentally ill. It’s pertinence is somewhat lost amidst the period setting, even if the issue of how those suffering from mental health problems are viewed by society is as relevant as ever. The opening of the film, however, drums home the idea of the mentally ill as embarrassments to their families and how women were grotesquely treated when diagnosed with hysteria.

Saturated in a penny dreadful aesthetic, Stonehearst Asylum teeters on the edge of camp horror hijinks, yet thanks to the troop of British thesps that make up the cast it remains a robust and enjoyable horror-cum-thriller. It riffs on the concept of the Victorian madhouse, and the moments that find Michael Caine’s grizzled Benjamin Salt, the true custodian of the mental institute, vying off against Kingsley’s mad-as-a-sack-of-snakes Lamb are incredibly enjoyable. As is Kate Beckinsale as the piano-playing inmate, Eliza Graves, who was committed to the asylum by her father when she bit off the ear of her abusive husband. Beckinsale’s character provides the love interest of the story, where her fluttering eyes and dainty piano hands catch the attention of the good Doctor, Newgate, who from the very off is beguiled by her womanly charms. The supporting cast equally elevates the film, which stays true to the cause retaining the atmosphere of Poe’s original text. Particularly enjoyable is Sophie Kennedy Clark as the sex-crazed nurse, Millie, and Thewlis as Finn, a role her clearly relished. It is an odd time of year for the film to be released, and the sunshine outside dulls the chilling atmosphere, which would have been better suited to a Halloween release. Nonetheless, Stonehearst Asylum, is a strikingly well performed, enjoyable – albeit a little old fashioned – penny dreadful that sends shivers down your spine.