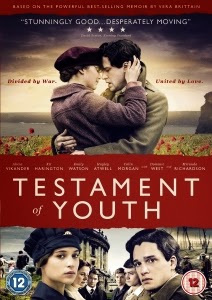 James Kent’s magnificent feature debut Testament of Youth (2014), based on Vera Brittain’s bestselling memoir about the First World War, is a real tearjerker that should move male and female audiences alike and appeal to fans of Joe Wright’s Atonement (2007). Screenwriter Juliette Towhidi (Love, Rosie) focuses on Brittain’s coming of age – from the rural idyll where she grew up, through the hallowed halls of Oxford, to the horrors of war – the loss she endured and the carnage she witnessed. All naturally led her down the path of pacifism. Vera (Alicia Vikander, Ex Machina), is desperate to study at Oxford but her father (Dominic West) disapproves of her academic ambition. 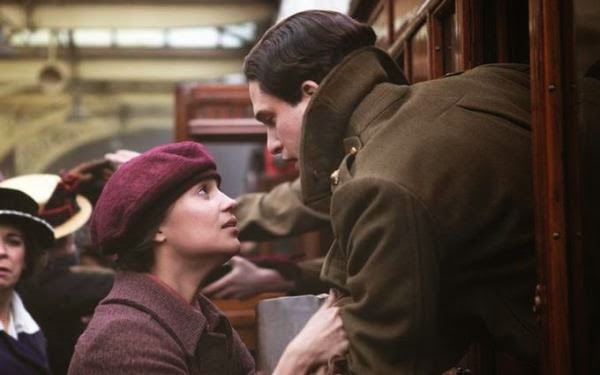 He’d prefer to see her married off as soon as possible. Persuaded by Edward (Taron Egerton), Vera’s beloved younger brother, he finally relents and allows Vera to sit the entrance exam. At the same time she falls in love with Edward’s school friend Roland Leighton (Kit Harington, TV’s Game Of Thrones). Both share a love of poetry, have literary ambitions, and are determined to go to university together. But the First World War intervenes and Roland volunteers. One by one the men in Vera’s life leave for the front shattering her hopes and dreams. She starts at Oxford but finds it increasingly difficult to study knowing that men are dying every day for their country. Against the advice of her blue-stocking tutor (Miranda Richardson) Vera volunteers as a nurse and experiences for herself the full horror of war and its casualties. During home leave, Vera and Roland become engaged but tragedy strikes before they can marry.

Vera then has to endure the death of her brother and another friend Victor (Colin Morgan). She returns to Oxford grief-stricken and slowly begins to rebuild her life. Brittain’s memoir is about the devastating effects of the First World War and the colossal waste of life over four brutal years. Kent forcefully brings this home in two scenes: In one, soldiers in the trenches, unknown to us or any of the characters, stare silently back at the camera; in another, cinematographer Rob Hardy pans over a vast field of the dead and dying lying on stretchers. Vera ends up working in a Casualty Clearing Station in France, where she nurses German soldiers – the experience teaches her humility and real, unwavering compassion. Here she realises the full extent of the bloodshed and has to deal with an overpowering sense of guilt. In return for Edward cajoling their father into sending her to Oxford, she had persuaded him to send her brother to war. Testament of Youth is a compelling, poignant drama with extraordinary central performances from Swedish actress Vikander and Harington, as well as solid support from British stalwarts Egerton, Morgan, Richardson, West, and Emily Watson as Vera’s mother.