There’s a moment around twenty minutes into Rosewater (2014) that’s so astoundingly awful in its pandering earnestness that it taints everything that follows. The offending scene involves social media chatter across Tehran culminating into a huge word cloud that fills the screen, spelling #Iran. While many will chalk it up to a lapse of taste on the part of a debut director with more to prove than the average first-timer (Jon Stewart being the former host of satirical political programme The Daily Show), it is in fact sadly emblematic of all that is wrong with Rosewater, a film so eager to please (the protagonist even reads a certain popular British film magazine) that it forsakes political grey areas for sentimentality. 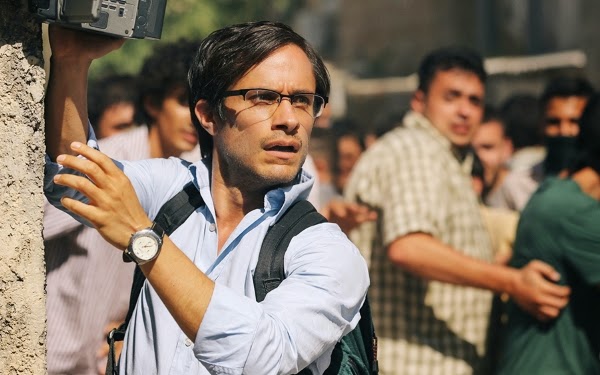 Based on a true story, Rosewater charts the travails of journalist Maziar Bahari (Gael Garcia Bernal) who returned to Iran in 2009 to cover the presidential election, only to find himself imprisoned, accused of spying for the Americans. As a comedian, Stewart is sharp and incisive; as a dramatist, he’s by turns bland and tone-deaf. Several scenes feel misjudged, both from a technical and thematic perspective. Bahari’s incarceration is defined by the hysteria of his captors and the constant repetition of interrogation. Both elements are overwrought, with the comedy sitting queasily alongside the seemingly endless drags of process. If we take a step back and look at the film on a more macro level, Stewart’s Rosewater becomes something of a key chapter in the crisis facing liberalism in contemporary cinema.

The malaise arising from our complicity in a decade of fruitless warfare has been largely eschewed in favour of a more dogmatic approach in which outright condemnation is afforded precedence over exploration. Modern offerings like Zero Dark Thirty (2012) and American Sniper (2014) – troubling, searching pictures mired in the tangles of the post-9/11 psyche – are wantonly dismissed for daring to explore the shades of grey beyond the pre-prescribed narrative of blame and repentance. We can only hope to understand the compulsion of empire by immersing ourselves in its vagaries. Political films should shake us; they should confront our obsequiousness and powerlessness. The great 1970s thrillers of New Hollywood were politically liberal, but formally confrontational and thematically nihilistic. In reflecting the abyss, they were unapologetically ugly, but rigorously moral. In 2015, we’re unnerved by such ambiguity. We’re happier to dismiss Kathryn Bigelow, call Captain America: The Winter Soldier (2014) a 70s paranoia thriller and praise incurious victim narratives like Rosewater. It’s worth noting that Watergate and Vietnam couldn’t be reduced to hashtags.