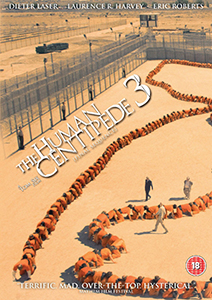 Tom Six’s The Human Centipede 3: (Final Sequence) represents something of a challenge to the star-ratings system. Give it one star or give it five. Heck, give it none! The most notorious film series in recent memory is bulletproof against the accusations and barbs of outraged critics. They can get on their high horses all they want to, calling The Human Centipede films depraved and disgusting will be worn as a badge of honour and causing a media stink is the very best advertising available. If you assumed The Human Centipede 2: (Full Sequence) to be the height of nastiness, you’ll have to reset your outrage-o-meter and add extra levels. 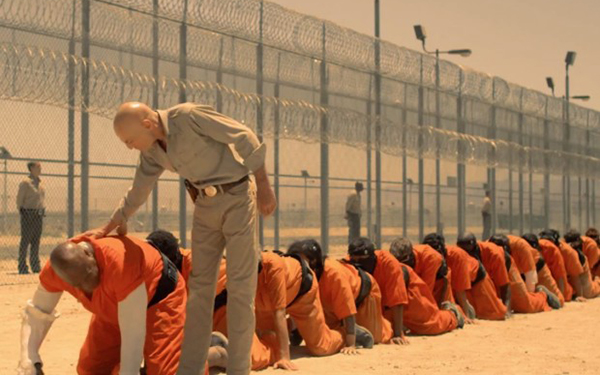 A third plunge into the transgressive cesspool has seen director Six make a film so artfully bad that, while entirely admirable, the decision to go full-throttle loco weakens the effect and impact, overall. More is more and nothing exceeds like excess, sure, but there is a sense of repetitiveness here that makes the whole thing a bit of a slog and one that, at just over 100 minutes, outstays its welcome like a drunken dinner guest that doesn’t realise its home time. As well as being bleak and repulsive, the mania – for that is exactly what it is – to make us laugh at debased figures and during transgressive scenes grows pretty tiresome. Setting the movie in America allowed Six to take aim at right-wing political rhetoric beloved of the Tea Party and Noughties bogeymen, the Neo-Cons. The Human Centipede 3 takes place in a maximum security prison, where a nerdy administrator, played by Laurence R. Harvey, complete with Hitler moustache, comes up with a ‘final solution’ that will rid the harried staff of all their problems.

He decides that the best way to cut down on costs and stop all the fighting among prisoners is to join them as a one giant human centipede. As with the sequel, this one takes place in a universe where the franchise exists as chief narrative crux and as a censorship board’s worst nightmare: the films influence the deranged actions of characters and guide the plot. Aesthetically ugly, the high-key lighting and okra-coloured hue have produced a malignant and sweaty atmosphere, a palette a world away from the previous dedication to a certain visual elegance. The first and second might be grubby in terms of imagery and narrative, but the cinematography was classy. It’s as if Six decided to rebel against his own artistic instincts and skills as a filmmaker this time around.