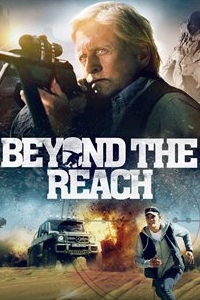 With a homicidal big game hunter as its chief antagonist, Jean-Baptiste Léonetti’s Beyond the Reach (2014) has a ripped from the headlines topicality, but unfortunately this plodding thriller consistently fails to engage. Michael Douglas plays John Madec, a high-flying finance mogul who likes to relax by taking trophies of wild, rare, if not actually endangered species. He doesn’t particularly enjoy hunting, he assures his young tracker Ben (Jeremy Irvine), finding it tedious – he just likes to have heads on his walls. Madec turns up in the small town bordering the Mojave Desert in his $500,000 SUV with his specialist rifle and greases the palms of the local constabulary into letting him hunt a bighorn sheep. 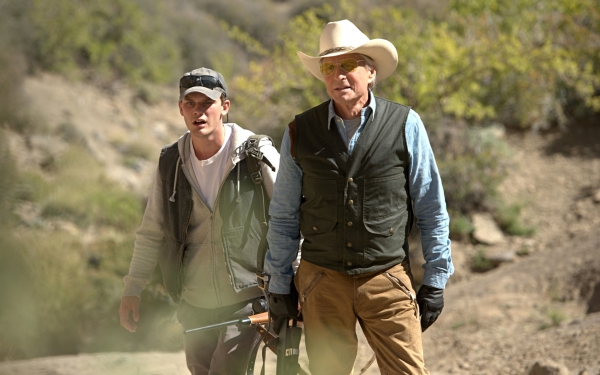 Ben is called in as a local guide, an expert in the terrain but with bills to pay and a girlfriend who already has one foot in college and presumably one far away from him. Madec is the other 1%, his Tardis-like SUV able to provide him with the perfect espresso and dry Martinis as he closes a multi-million dollar deal with the Chinese via a satellite phone. However, when a bafflingly insouciant shooting accident takes place and Madec decides to cover it up, Ben becomes his prey. Stripped of his gun, his boots and his clothes, he is stalked by Madec through the desert like a beast. Madec is keen to see the young man die of heat exhaustion and thus foot the blame for the fatal accident on the elements.

Léonetti has taken Stephen Susco’s screenplay (based on Robb White’s 1972 novel Deathwatch) and obviously hoped to craft a seventies style neo-western. John Boorman’s Deliverance (1972) springs to mind in the recrafted clash between local and city boy. Sadly, Léonetti over-directs proceedings. There are lots of beautiful shots of the Mojave but none of them are long enough to get a genuine sense of place and their point of view is so arbitrary it makes the setting a beautiful photo-vista rather than a real landscape. This is only part of the larger problem of pacing. Genuinely tense scenes aren’t allowed to play out with the tension they deserve, as Léonetti, pleased no doubt with finding some good angles, puts them all in the edit. Add to this numerous contrivances and the randomness of plot – including what screenwriting manuals call ‘the inciting incident’ – and Beyond the Reach simply doesn’t grip the way it should.

Douglas already has form as a big game hunter – see Stephen Hopkins’ The Ghost and the Darkness (1996) – but here he plays Madec as Gordon Gecko with a gun, and to some extent this is also a problem. With a little more shading (or indeed some), Madec could have been a more insidious character, able to win some admiration from the working class Ben. Instead, he’s more like a Donald Trump figure: a blowhard from the get go and equally despicable whether he’s trying to kill you or just spouting off. While the ending becomes genuinely preposterous, at least Beyond the Reach can claim – unlike certain Minnesotan dentists – no animals were harmed during the filming of this picture.