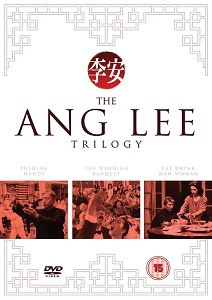 Commonly referred to as the ‘Father Knows Best Trilogy’, Ang Lee’s first three films are notable primarily as an introduction to key themes and his devotion to nuanced emotional drama. They also staved off the retirement of famous Taiwanese actor Sihung Lung. Almost a decade before his appearance as Sir Te in Crouching Tiger, Hidden Dragon (2000) he was convinced to shed his tough-guy image in favour of the serenely charming Mr. Chu in Lee’s debut feature, Pushing Hands (1992). Altitude Distribution are now bringing that film and subsequent Lee/Lung collaborations The Wedding Banquet (1993) and Eat Drink Man Woman (1993) to UK DVD in The Ang Lee Trilogy box set. 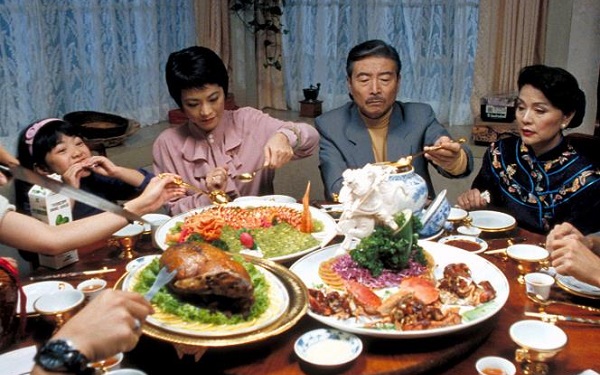 In all three films Lung played the ageing patriarch coming to terms, in one way or other, with the maturation of his brood. In Pushing Hands he is a veteran Tai Chi master forced to emigrate to the United States to live his twilight years in the home of his son and American daughter-in-law (Bo Z. Wang and Deb Snyder). He once again follows a son to the US in The Wedding Banquet, though on this occasion his offspring (this time played by Winston Chao) is attempting to conceal his gay relationship with Simon (Mitchell Lichtenstein) by faking a marriage to his tenant Wei-Wei (May Chin). Finally in Eat Drink Man Woman he is a father struggling with his own age and three vastly different adult daughters (Yu-Wen Wang, Chien-Lien Wu, Kuei-Mei Yang). All three films are fairly limited in their scope – especially when compared to the rich mastery of Lee’s more recent output from the sumptuous Lust, Caution (2007) to the roiling narrative currents of Life of Pi (2012).

However, they also touch upon interesting preoccupations both for the director and wider Taiwanese society during the 1990s and give insight into later thematic and stylistic decisions of Lee’s. The homosexual relationship at the heart of The Wedding Banquet, for instance, would be a subject returned to in Brokeback Mountain (2005) – for which Lee won the first of two Best Director Oscars – and Taking Woodstock (2009). All three films also foreground anxieties and realities of the younger generation emigrating away from Taiwan and the changing notions of family and obligation that this necessitates. Through Lung’s characters – particularly in Pushing Hands and Eat Drink Man Woman – pay homage to an elder generation of masters devoted to their disciplines.

In the former, the soothing rhythms of Mr. Chu’s Tai Chi are reflected in the considered pace of the entire film and while they are keenly juxtaposed against his own personal turmoil, his skill is diligently observed. There are even a couple of scenes that winningly pre-empt the wuxia of Crouching Tiger that hindsight furnishes with a smile. Despite farcical elements in both The Wedding Banquet and Eat Drink Man Woman these are generally cordial and elegant films that present complex and developed emotional entanglements navigated with dexterity that signalled the formation of a real talent. They may not stack up to Lee’s most lauded work, but they’re a must for fans.