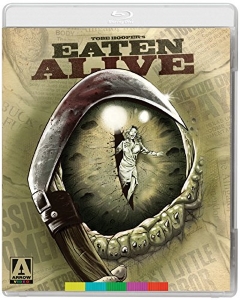 Tobe Hooper has enjoyed an erratic career, but even some of his lesser titles manage to be sporadically entertaining. Eaten Alive (1976) is the exception. A follow-up to The Texas Chain Saw Massacre (1974), Hooper swaps the vérité terror of that horror masterpiece for a stagy, plodding slice of wannabe southern Gothic-cum-grubby exploitation flick. The film’s genuinely creepy soundstage set and lurid colour palette manages to conjure up a little of that fun cinematic fleapit trashiness, but Hooper’s uncertainty with his material leaves little to enjoy here. Don’t let the purposely provocative title or the film’s original quad fool you into thinking it’s some kind of schlocky guilty pleasure. 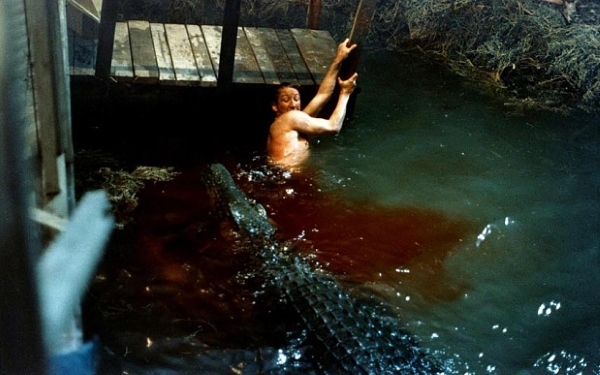 In a plot that shares more than a few similarities with Psycho (no spoilers here) a meek prostitute named Clara (Roberta Collins) is forced to leave the brothel she’s employed at after a run-in with a client. She seeks shelter and accommodation in a ramshackle hotel next to a murky bayou. It’s the property of a severely disturbed one-legged hick named Judd (Neville Brand) whose pet crocodile gingerly swims around behind the property, waiting for its next meal. Luckily, dinner is just around the corner, and a vacationing couple with their young daughter (alongside Clara’s concerned father and sister) could also offer up a plentiful snack for the fearsome swamp dweller.

In what looks like a cheap TV movie from that era, Hooper populates his cast with recognisable genre favourites. A pre-Krueger Robert Englund puts in an appearance as one of Clara’s disgruntled customers and Phantom of the Paradise’s William Finley plays the unhinged father. Even small-screen Morticia Addams, Carolyn Jones, shows up as a madam (bizarrely, caked in green face paint during the opening scenes). It’s a shame these interesting assortment of character actors have little to work with – which also goes for Chain Saw heroine Marilyn Burns, who is forced here to play the same kind of shrieking captive yet again. Eaten Alive is plagued by Hooper’s endlessly strange directorial choices, particularly when it comes to getting performances from his leads. His efforts confound rather than disturb. Distributors Arrow Video have managed to come up with yet another peerless transfer, reverential to the original format. After releasing a number of Hooper’s earlier features, there’s a good reason why they chose this to be the last one to see the digital light of day.