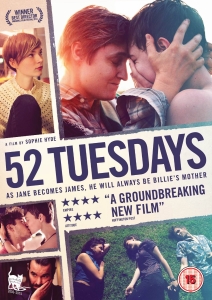 The writer and director of 52 Tuesdays (2013), Sophie Hyde, must be commended for her sticking to the challenging rules that she set herself. The film was shot strictly on every Tuesday for a year, to the point that when one character takes a brief trip to San Francisco they still made sure that the crew stuck to Australian timezones when shooting his scenes. This rigorous, near-masochistic commitment to form could easily be deemed unnecessary, but the authenticity it adds creates a depth that the film would have lacked otherwise. 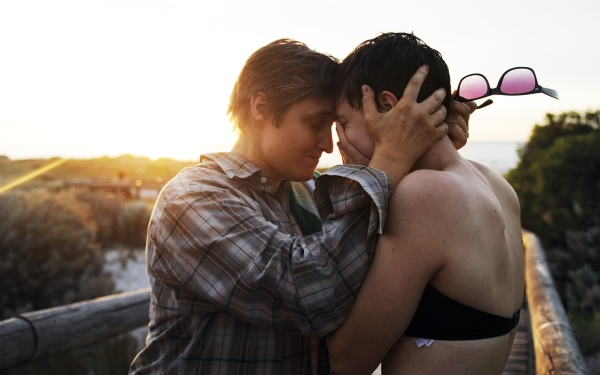 Charting the year in which a mother and daughter pair both go through dramatic transformations: 17-year-old Billie (Tilda Cobham-Hervey) grows into a woman through sexually-charged experimentation with two friends, whilst her mother (Del Herbert-Jane) comes out as transgender and begins transitioning to living as a man. The changes they go through are just as physical as they are emotional, and seeing them grow as their relationship does creates a striking visual hook on which Hyde can hang her story.

Hyde never opts for the obvious, finding original spins on the dual stories that run through the film. Not that these stories were clichéd in the first place – girls’ coming of age stories are scarce compared to boys’, and though trans issues are gaining more attention than ever before, we’re still a long way away from having a range of interesting and thoughtful representations on-screen. But even if this trans character plays second fiddle to his daughter, it’s still a sensitive exploration of the trials of transitioning later in life, one that really seems to understand what it’s like to have to figure out who you are after pretending to be someone you aren’t for so long whilst still being surrounded by people who depend on you. However, the film’s focus is on Billie and her sexually charged experimentations with two friends in the wake of feeling abandoned by her mother. Like Minnie in this year’s The Diary of a Teenage Girl (2014), Billie’s sexuality is fierce and unapologetic, but it’s a wildfire that feels genuinely dangerous as she and her friends begin to explore by filming their escalating interactions.

The push and pull between the sense that Billie needs to explore to grow but may eventually harm herself and others with her actions is a refreshingly thorny and complicated take on the coming-of-age trope. So it’s a shame that with in spite of the abundance of great ideas, the film seems to fall flat, and the issue seems to lie with its structure. 52 Tuesdays is a lot of Tuesdays, and the film languishes in its middle section repeating similar beats over and over. And the steady march of time that the film requires means that more interesting elements are glossed over – one passage in particular, where James discovers that his body is rejecting hormone therapy and he must transition without testosterone, is begging to be explored in greater detail, but before we can really process his despair, it’s passed us by. Ultimately, despite the clear interest that 52 Tuesdays has in its subjects, its exercises in form end up obscuring its story rather than enriching it.