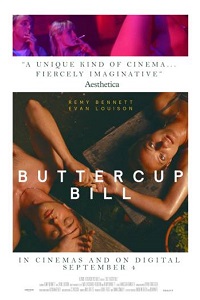 “Like a murderer jumping outta nowhere in an alley, love has jumped in front of us, like a lightning strike.” This may seem a bizarre way to describe a relationship but in fact it perfectly captures the essence of the strange psycho-sexual bond that lies at the twisted heart of Remy Bennett and Émilie Richard-Froozan’s Buttercup Bill (2014). It’s a tantalising piece of slow-burn Southern Gothic that threatens to never get going, but even in its listless moments never relinquished a pervading sense of threat. Violence and aggression lurk just beneath the surface and the film cultivates a decidedly Lynchian vibe, particularly in the form of its striking opening. 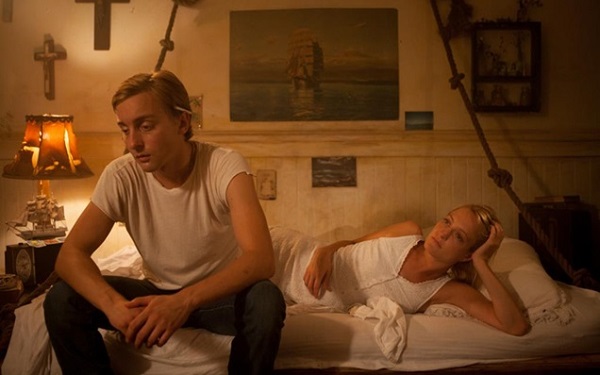 A fractured and dizzying delve into a grief-stricken mind, the film’s first section boldly attempts a formal approximation of said grief. The death of childhood friend Flo casts Pernilla (co-director, Bennett) into a state of disarray. Memory and reality collide as her past and present merge. Overlapping and repeated sounds and images create a impressively effective evocation of loss. It is like someone has unceremoniously dumped the contents of Pernilla’s mind and memory onto the floor and she scrabbles through the detritus to make sense of her suddenly shaken world. However, it soon becomes evident that it is not Flo for whom she is longing, but the third corner of their adolescent triumvirate, Patrick (Evan Louison) and a mysterious boy in a cowboy hat that seems to haunt her waking dreams – the eponymous Buttercup Bill.

From there, the narrative settles into a less radical groove as Pernilla abandons her life and partner in New York for the rundown squalor of Patrick’s Louisiana life. Cinematographer Ryan Foregger shoots proceedings with a magic hour quality – the surroundings may be dirty and kitsch but they’re bathed in luminous golden light. This may seem like the filmmakers’ submitting to the clichéd splendour of bucolic poverty, but has the film truly left the perspective of Pernilla? “I miss you like hell,” she keeps stating on his answering machine before they’re reunited and the happy glow could just as easily be projected by her as by the filmmakers. Pernilla and Patrick appear to pick-up where the left off years earlier – both Bennett and Louison precisely tread an uneasy tightrope between emotional naivety and physical maturity. At times they can be inscrutable, and the drama sags in the stale air of their psychological stasis but this actually enhances the creeping disquiet. What begins as playful childishness soon reveals itself as something far more sinister, only emphasised by the flashbacks to the innocent costume-clad Bill. Pernilla and Patrick are like tortured soul-mates; they’ve seen the darkness that lies at the end of this path, but their powerless not to walk down it anyway. Bennett and Richard-Froozan’s choice of title conjures Bill, stood in at the path’s distant end, like a murderer jumping outta nowhere in an alley.