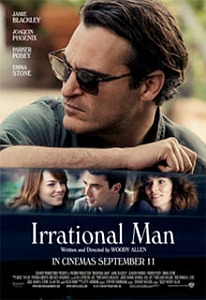 As yet another slinky jazz number kicks in and that all-too-familiar credit typeface appears, there’s still something undeniably comforting about slipping back into a Woody Allen film. Irrational Man (2015), his 45th feature, starts off promisingly enough. The type of darker morality play Allen likes to roll out every so often, there’s a nice slither of dark humour running throughout and the first half exudes charm and character (regular cinematographer Darius Khondji gives the New England setting an intoxicating autumnal glow). However, as the film progresses, it feels increasingly like the kind of half-formed idea that Allen had tucked away in the back of his writing bureau for some time. 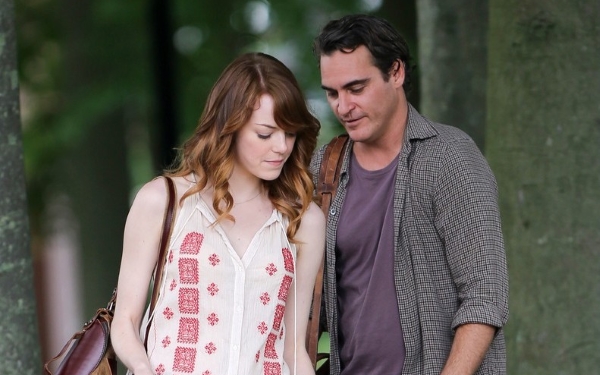 Joaquin Phoenix (displaying an deeply impressive middle-aged spread) is Abe Lucas, an embittered philosophy professor who has started work at a new college but is still deep in an existential funk which has rendered him effectual, morose and impotent. The latter is of particular annoyance to predatory campus wife and teacher, Rita (the great Parker Posey, a tad underused). A functioning alcoholic, Abe’s still manages to win the heart of an infatuated student (Emma Stone, returning to the Allen fray) in his torpor. As the two begin to form a close bond, they happen to overhear, one day, a conversation in a restaurant about a family torn apart by a corrupted judge’s legal decision.

From there, Abe begins to muse whether murder might lift him out of his apathy towards life. While Abe is a neurotic intellectual in that all-too recognisable Allen mode, he’s a little slouchier than the normal portrayals and the ever dependable Phoenix brings depth and an unnervingly sociopathic gaze that even the director may not have anticipated. Unfortunately, Irrational Man is stymied by the less appealing Allen trademarks, namely a superfluous voice-over narration from both leads, (he could benefit from ascribing to the ‘show, don’t tell’ technique occasionally) and an awkward shift in plot which sets the events of the deeply contrived second act into motion. This is where Stone turns into a casual sleuth who happens to find all the pieces of the puzzle falling perfectly (and predictably) into place. A mildly diverting 90 minutes but little else, Allen apologists may be inclined to give Irrational Man a pass, but a mainstream crowd, possibly swayed by the casting of Phoenix and Stone, will struggle.