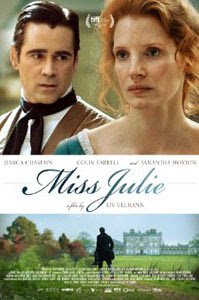 All the pieces seemed to be in place for Liv Ullmann’s take on Miss Julie (2014), Swedish playwright August Strindberg’s examination of class and sexual politics set in the waning years of the 19th century. A pedigree director in the form of Ullmann, a powerful pair of leads take the shape of Jessica Chastain and Colin Farrell and a sumptuous, sprawling countryside estate in Victorian-era Ireland as the setting should all, in theory, create a lovely piece of cinema. Unfortunately, there’s something too jarring about what unfolds over two very long hours. Rife with mawkish histrionics and a thoroughly overwrought script, it’s hard to maintain interest in what should be an intriguing watch. 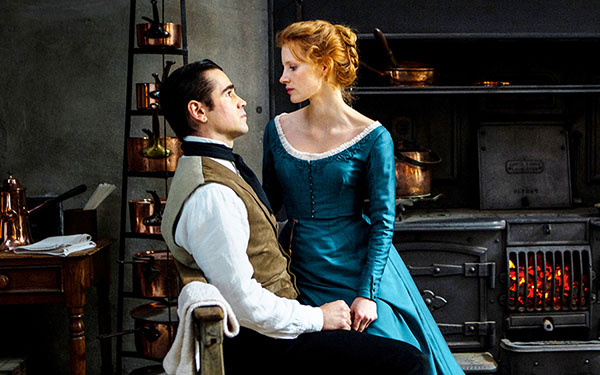 It’s Midsummer’s Eve in Ireland circa 1890 and all is quiet – for now. In a very large and very empty manor, only three souls scurry around in the oppressive solitude: Miss Julie (Chastain), Jean (Farrell) and Kathleen (Samantha Morton). Jean and Kathleen are the dutiful servants to Julie, although it becomes apparent very quickly than Jean is a rakish social climber. His ambitions embodied in the travel brochures he carries around and easy disdain he shows for Julie, Jean is a man with his eyes focused on the top rung of the ladder. Meanwhile, Julie wanders the house like a ghost, filling her idle time pining for her dead mother and engaging in scandalous pursuits with men. She is the embodiment of the dying upper class: beautiful, wrathful and vulnerable to the core. Over the course of the evening, Julie and Jean engage in a battle of wills, each trying to seduce and degrade each other in equal measure, looking for forgiveness for their sins and redemption from their actions.

While the decision to move the action from Sweden to Ireland will remain only known to Ullmann (as there is no discernible benefit onscreen for this choice), what becomes quickly apparent is that not even a location change or the benefit of powerhouse actors to engage us can save this flailing production. Ullmann’s script still feels too theatrical: the language moves from flowery to brusque with the rustle of a bustle, leaving the actors to not only seem cagey but overly emotional. Farrell and Chastain have proven to be adept actors but here all they seem to do is show us they can scream, cry, quiver and plead like the pros they are. Left to fill in the emotional impetus behind each of their actions from a faulty script, they move through some very lovely set pieces – a majority of the time – like banshees, begging one another to just listen to their own plight. Miss Julie is, put simply, a tiring watch. If this exercise in impassioned and pained period drama proves anything, its that some things are better left on the stage.