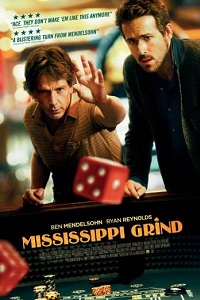 With its loose road movie vibe and appealingly downtrodden turns from the two tremendous leads, Mississippi Grind (2015) certainly fits into the ‘they don’t make ’em like that anymore’ cinematic category. Writer/director duo Anna Boden and Ryan Fleck, no strangers to thoughtful character studies (Half Nelson, Sugar), are clearly more interested in spending time on mood and performance than plot. Their film conjures fond memories (without ever coming across as an outward steal) of contemplative 70s work like Fat City. 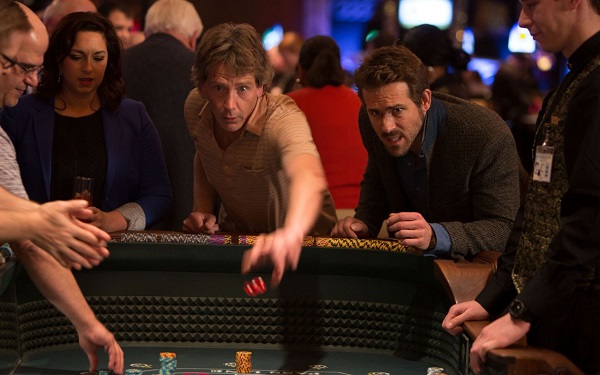 Unlike some gambling-based movies out there, the filmmakers are unconcerned with the mechanics of the game, and instead focus on what motivates the characters and the sometimes emotional ramifications of their shared addition. Ben Mendelsohn is Gerry, a career gambler who is on what looks like a terminal losing streak, owing untold amounts to various creditors, one of whom (a brief but memorable turn by Alfre Woodard) is about to lose all patience with him. His possible salvation comes in the form of Curtis (Ryan Reynolds) a younger poker wiz with oodles of charisma and a seemingly magical touch, both on the table and at the dog track. A fast friendship developments between the pair, and Gerry soon offers his new bromantic partner a proposition – if he spots him a couple of grad, the two can make their way down South toward a legendary high-stakes poker game in New Orleans, which will offer them the potential opportunity to put right all the wrong turns they have taken.

Boden and Fleck have themselves also taken something of a punt in casting Reynolds, but it’s paid off magnificently. Hidden slightly under five-day stubble and possessing the kind of darkened circles under the eyes which equate to a life of nocturnal activity, this is undoubtedly the actor’s strongest performance thus far. He is equally matched, however, with yet another superlative turn by the peerless Mendelsohn, channelling here the kind of a schlubby, but doggedly sympathetic, lowlife figure which brings to mind a Dustin Hoffman in the prime of his career. They have an effortless chemistry on screen together and are immensely watchable, helped by Boden and Fleck’s unshowy direction, which never gets in the way of the actors, both of whom are often shot in intimate, probing close- up. Add a memorable bluesy soundtrack to the mix, and Mississippi Grind offers up the kind of film which is pretty easy to place all bets on.