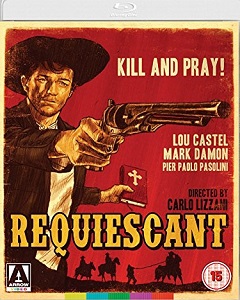 The Spaghetti Western, as exemplified by The Good, The Bad, and Ugly (1966), Once Upon a Time in The West (1968), and Django (1966), is defined by its heightened visual style, its brutality, and its amorality. Carlo Lizzani’s Requiescant (1967), nicely presented here in a vibrant and crisp Blu-ray transfer, has the first two in spades – playing out the Spaghetti Western formula like clockwork – yet retains a moral compass often lacking in its more famous brethren. 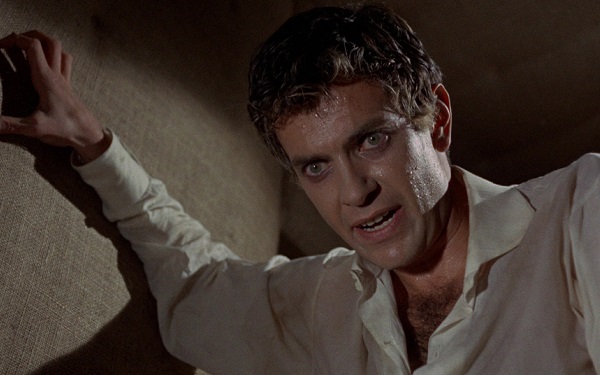 Indeed, where Sergio Leone filmed a world devoid of right and wrong, Lizzani’s vision is one teetering on the verge of moral chaos, balanced only by the unwavering innocence of its eponymous hero, a rare twist on the reluctant fighter. Indeed, Requiescant (Lou Castel) takes no pleasure in killing, even going so far as to say Latin requiems for his fallen enemies. True to the genre, the hero is defined by his preternatural propensity for gunplay. Symbolically killed and reborn by a stray bullet at the film’s opening, he is rescued as a young boy and renamed ‘Requiescant’ by a travelling pastor, growing up with no knowledge of his identity, but with an unshakeably naive sense of right and wrong .

Where Requiescant the hero is defined by his faith in human decency, Requiescant the film is shot with a bawdy religiosity. Its frequent use of single source lighting and decadent colour ironically recall the paintings of Dutch masters such as Gerrit van Honthorst, highlighting the false distinction between righteous and immoral violence. Complicating matters further is the film’s villain, George Bellow Ferguson (Mark Damon), a self-styled Southern Gentleman, who in between running the Mexican border town which he stole from its inhabitants, lectures his underlings on the benefits of slavery with the stomach-churning audacity of asking his black man-servant his opinion on the matter.

Requiescant shines in this regard by unsettling our comfortable sense of right and wrong, forcing us to actively engage with Ferguson’s repellent but insistently rhetorical argument. But make no mistake: this is a film steeped in morality, but it is one that has been twisted and broken by the inevitability of violence. Lacking perhaps the masterful style of Leone’s Dollars Trilogy, or the censor-baiting gratuity of Sergio Corbucci’s Django, Requiescant is nevertheless an important entry into the Spaghetti Western genre, a luxuriantly brutal film with a thematic fixation on conflicting moral codes that differ in ideology but are alarmingly similar in outcome.