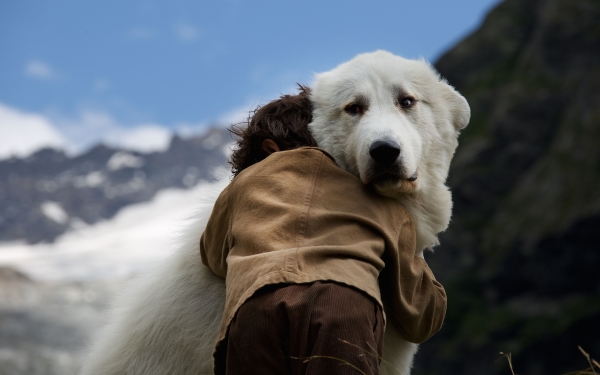 At its heart, Nicolas Vanier’s Belle & Sebastian (2013) was a charming story of the loving bond forged between a young boy and his dog. Set in 1943, their plentiful escapades took place against the backdrop of Nazi occupation in a small town near the Swiss border where mountaineering residents guided Jews to safely neutral territory. Albeit dumbed down and a little clunky in places, the historical context added a heightened drama to the grandeur of stunning alpine scenery and a Tintin-esque tale.

Gaumount, evidently seeking to further the success of the plucky duo’s first outing, have commissioned a Part Deux with French-Canadian director Christian Duguay behind the camera this time around. The Adventure Continues (2015), which again draws inspiration from the work of authoress Cécile Aubry, follows a more straightforward action-filled route while adding a further personal layer to its predecessor. A simple tale of right and wrong, courage, love and perseverance, Duguay’s picture has a lot to offer a younger audience and will be a good first step for some into the world of subtitles and foreign cinema.

Jumping forward to September 1945, the village of St. Martin revels in post-war relief and schoolchildren make their return to the classroom. All except Sebastian (Félix Bousset – a very likeable and confident on screen presence) who is up to his old tricks playing in the hills with Belle, an enormous Pyrenean Mountain Dog whose bark is far worse than her bite – most of the time. Sebastian, rescued when abandoned at birth and raised by an adoptive grandfather, César (Tchéky Karyo), eagerly awaits the return of Angelina (Margaux Chatelier), his mother of sorts and niece to César, from her time in La Résistance in London. Complicated family dynamics aside, tragedy strikes when the plane carrying Angelina crashes in the wilderness of the French-Italian border, setting ablaze an enormous forest fire – one is led to assume St. Martin must be equidistant from each of the neighbouring countries. César and Sebastian enlist the help of shady pilot Pierre Marceau – the young gun’s long lost papa – to search for Angelina, presumed dead.

Another plane crash, a fight with a grizzly bear (in the Alps?) and much flame-licked falling tree dodging follow as father and son bond with the help of their snow white canine companion. The bounds of believability are pushed to breaking point at certain moments but part of the fun of this film is in Sebastian’s fearlessness, determination and reckless disregard for all aspects of health and safety. A simpler and seemingly far more dangerous time it was. Belle & Sebastian: The Adventure Continues does work as a standalone feature but would be best seen in conjunction with the former offering. Older viewers may well roll eyes at the predictability of it all but children will surely be rapt by the close shaves, heroic antics and timeless warmth that comes from the relationship between a boy and his dog.