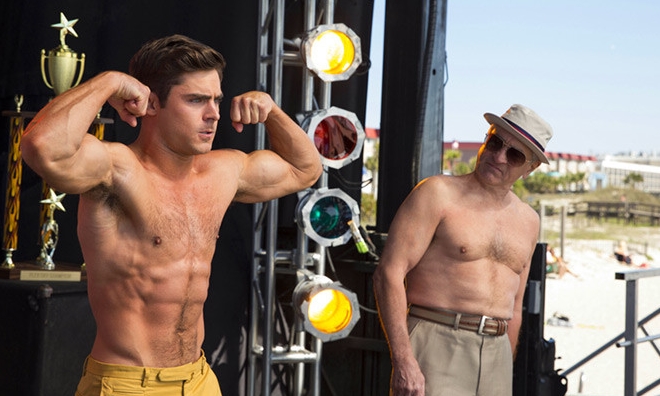 Dan Mazer’s Dirty Grandpa sets up its stall as an irreverent and defiantly non-PC comedy vehicle for Robert De Niro. At least that’s the idea and intention. And we all know what the road to hell is paved with, right? What actually unfolds across a hard slog 102 minutes is a dumb, mean-spirited and woefully unfunny dude-bro fantasy. After losing his wife of forty years to cancer, Richard Kelly (De Niro) just wants to, in his own words, “Fuck, fuck, fuck, fuck.” He ropes his supremely uptight nephew, Jason (Zac Efron), into taking a road trip Florida, even though the lad is about to get hitched to bridezilla, Meredith (Julianne Hough). Before you can crank up the volume on your car stereo and yell ‘Spring break forever, bitches!’ the duo fall into a range of outrageous mishaps and drunken shenanigans.

Dirty Grandpa is essentially an updated 1970s sitcom scenario featuring the archetypal racist, homophobic, sexist and misogynist figure. Instead of being a man out of time, he is posited as a naughty but endearing old goat educating younger guys about partying and being a hetero tiger. The result is crude, lewd and rude for much of its running time but, as it’s also a mainstream American picture, there must be lessons learned and personal epiphanies to drive the third act to the standard-issue ‘let’s all hug’ climax. There is the sense, at least initially, that Dirty Grandpa is a satirical figure/cipher and a deconstruction of the current ‘dude-bro’ phenomenon. That would work fine enough if it A) didn’t screw things spectacularly and B) wasn’t also trying to be a syrupy relationship drama powered by Hallmark sentiments. Neither does the character’s emotional beats social and cultural shifts in attitude make one iota of sense.

After serially belittling a black gay character, Kelly unexpectedly defends him against an attack by gangsters in a nightclub. Such is the man’s bro spirit, however, he befriends these thugs, shoots the shit with them and asks during a karaoke jam for permission to use the N-word (he’s singing Ice Cube’s Today was a Good Day). The sudden emerging of a softer side denigrates the wilfully nihilistic ‘I’m old and don’t care’ shtick. Dirty Grandpa wants to be as filthy as a Tijuana peep show featuring a beleaguered performer and put upon donkey, but ends up as sickly sweet as a Werther’s Original.

Fans of De Niro – or rather Na Diro, given the nosedive in quality his choices have largely been since the dawn of the 21st century – can only carry on weeping and mourn the loss of one of the true screen greats. Efron, currently making creative decisions mid-2000s Ben Affleck would turn down flat, needs to stop pandering to frat house audiences. The actor has got star quality in spades, but his choices continue to stunt his big screen development. For what it’s worth, and it isn’t much, the film does possess one mildly amusing gag. The deliberately icky relationship between Aubrey Plaza’s Lenore and Richard is given a literary sheen, when the horny-for-old-geezers college girl refers to him as her “Henry Miller”.