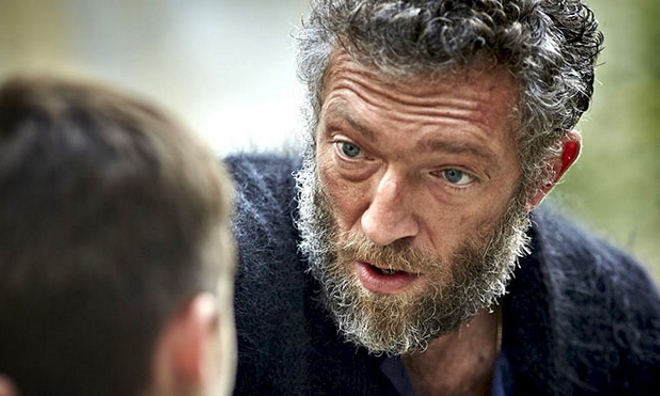 Vincent Cassel possesses such a steely, lupine charm that he always engenders the characters he plays with subtle menace and ample charisma. His new film Partisan is no exception, giving the actor much of the heavy lifting to do in a deliberate almost-thriller that provokes many questions, but leaves explanation equivocally out of focus right through to its conclusion. Even the wider setting – which may well be a dystopian near-future – is left purposely off screen as the paternal bonds in an isolated commune strain against Oedipal undercurrents and the film’s overall cohesion longs for context to add meaning.

That said, it is an assured and brave debut feature for director and co-writer Ariel Kleiman, who repeatedly resists giving easy answers, or many answers at all, in favour of cultivating a beguiling if ultimately unsatisfying mystery. It begins with Cassel’s Gregori as a Christ-like figure, a beam slung over his burdened shoulder followed by scenes of his construction of a dining table. What transpires is less Son of God and more a case of a self-styled saviour who amasses a congregation of single mothers and their children to become his own reclusive brood. Kleiman conveys the setup with astute economy, but it helps that many details remain untold. All that matters is the strange cult of Gregori filled with an adoring harem and a cadre of enrapt kids – a pre-pubescent army that presumably provide the title.
Their manor is a courtyard surrounded by ramshackle abandoned buildings. This is a world of concrete and coloured paint meeting in a distressed grandeur, the palette of which vaguely calls to mind The Good Life by way of Joe Wright’s Hanna. Germain McMicking’s cinematography emphasises this dishevelled collision of life and decay – one that is more than applicable to the group itself, and the hirsute Gregori. He is an unnerving blend of devotion and despicable intent as the deadly purpose of his idiosyncratic lessons and training soon becomes painfully evident. The arrival of a new woman and her slightly older son into the community fires an initial shot across Gregori’s bow and soon the oldest of his flock, the 11-year-old Alexander (Jeremy Chabriel) begins to question the values of his unconventional family.
The camera spends a lot of time lingering on the children’s silent reactions to their patriarch – particularly in the case of Alexander – often observing stoicism and only the faintest hints of the deeper feeling. Chabriel is perfectly fine, but the restraint of his performance frustrates on occasion; fortunately, when the moment that redefines his relationship with Gregori comes, he produces something pretty special from his standard issue blue backpack. Cassel for his part is rarely stretched, but menacing notes pervade even moments of levity. A scene in which he tells Alexander a chilling story to warn of the dangerous outside world (referred to as “them”) sees him reminisce about the sweetness of his mother’s perfume, and the potential danger if it came into contact with a match. Partisan ultimately feels more like the former; an alluring scent that threatens to catch light, but never quite does.
Ben Nicholson | @BRNicholson
Facebook
Twitter
Pinterest
LinkedIn
Go to mobile version