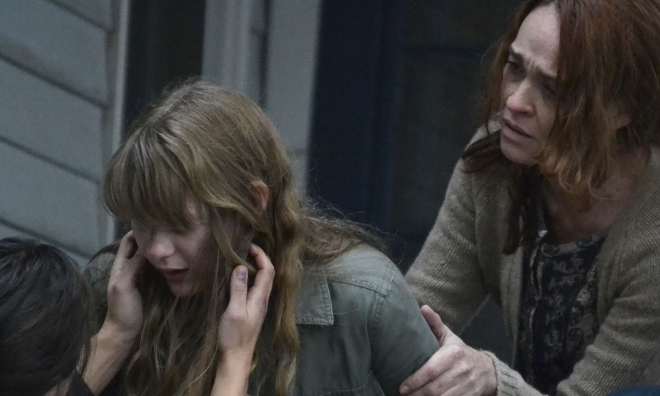 The previous credits of Sonny Mallhi, directing for the first time with Anguish, may not have inspired much confidence. Co-producing the Oldboy remake and exec-producing The House at the End of the Street – the one Jennifer Lawrence film people are prepared to forget – will do that. Thankfully, Anguish is accomplished enough to make you excited for whatever Mallhi works on next. Having premièred in the UK at Glasgow’s FrightFest in February, the film is about two disaffected Illinois teenagers with a paranormal link. Lucy (who insists on being called Lucinda) is the one tragically killed by a truck, and Tess (Ryan Simpkins) is the one moving to the same town, bearing a history of severe anxiety problems.

In Tess’ isolated state, distant from her mother (Annika Marks) and maintaining little contact with her military dad, she’s increasingly haunted by what she thinks is a ghost until she falls unconscious. Is she possessed by Lucy’s kindred spirit, and can Tess return to her body? The irony is that the most out-of-place elements in the film are what it’s determined to highlight the most: the bookend title cards which describe the prevalence of mental disorders in children, and state that the film was “inspired by true events”. It’s a nice sentiment, yet it clearly clashes with the film’s subject matter, both supernatural and regular-natural. Anguish is in fact a much better, elegant metaphor for the adolescent fear of growing into adulthood, plus the fear that you are alone in those insecurities. In portraying Tess’ loneliness, the production actually uses its budgetary constraints to its advantage. Even in locales where we might expect lots of people such as at the school or the middle of town, Tess is consistently shown by herself, in the centre of frame, with only ambient sounds and no dialogue.

Simpkins plays Tess sullenly whilst avoiding clichéd mood swings. She deserves much credit for this and later parts where she has to play another teenager occupying someone else’s body. Although its narrative occasionally defaults to the convenient, it keeps up the pacing and focuses on the really confident dramatic material. The way Lucy’s mother is woven back into the story may be creakingly obvious both as written and delivered by Simpkins and Karina Logue, but it does its job, and the payoff where two mothers are faced with either the salvation or permanent loss of their child through Tess’ body is legitimately wrenching stuff. Anguish isn’t the scariest or most original thriller, but it’s a surprisingly involving and creepy one and about as well-crafted as could be hoped for.