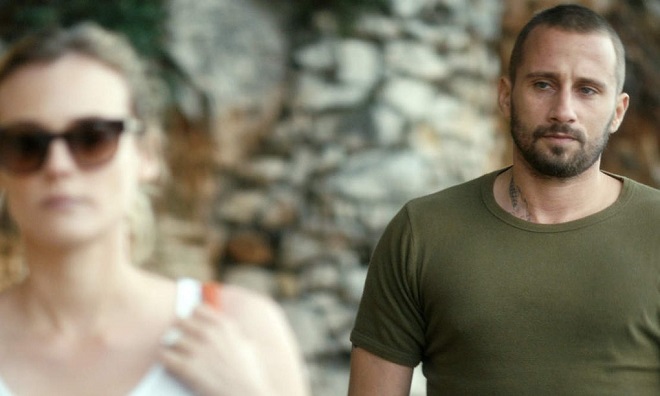 Belgian studmuffin Matthias Schoenaerts is often called upon to bring charismatic, steely-eyed intensity to tough men who possess a principled, protective interior. Well known from Rust & Bone and The Drop, the actor was a natural choice for French director Alice Winocour’s latest feature, Disorder, in which he plays a troubled soldier on his return from Afghanistan. A simmering but underwhelming thriller, its quiet, methodical contemplation of a simple thread is punctuated by admittedly punchy action sequences. The overall effect is not necessarily disorderly, but one that does not fulfil its full potential.

The film opens to the hum of cicadas. As Vincent (Schoenaerts) and fellow soldiers come into shot, lumbering in crackling heat under the weight of full packs, it is instantly apparent that he is not well. An ear-bursting synth/techno soundtrack (from French DJ Gesaffelstein) makes its first intrusion here and will loop in and out continuously as and when Vincent’s anxiety, hallucinations, sweating, random bleeding and hand-shaking take hold. Fearing he will not be sent out on another mission, he breezes into a security job for a soiree at the swanky Maryland residence of an arms dealer (Percy Kemp), his kept trophy wife (a dual French-American speaking role for German actress Diane Kruger) and their son (Zaid Errougui-Demonsant).

That Vincent is brought on for an event at which various dignitaries are present given his condition is step one into the realm of implausibility. Georges Lechaptois’ frequently unsteady-cam follows him throughout and just as the thumping score blurs in and out of focus so does a lens that reflects our hero’s clouded state of mind. After overstepping the mark on several counts at the party, step two involves Vincent being handed bodyguard duty of Jessie (Kruger) and son as papa has to jet off to Geneva. Babysitting doesn’t prove smooth sailing and it is a shame that Disorder reaches its breathtaking, and admittedly very well executed, peak so soon before plateauing into obscurity.

Winocour’s second feature hints at a number of broader issues but leaves them too vague to hit home. A brief doc’s visit points toward Vincent suffering PTSD but any further inspection hits a dead end; he visits a rehab hospital for wounded vets but purloins prescription meds instead of seeking psychological treatment. The coup de foudre which strikes him upon seeing Jessie in a backless dress progresses to voyeurism via the house’s web of security cameras but the fine line between protection and obsession could have been explored further. A tenuous allusion is made between Kruger’s closeted existence and the treatment of women under ISIS, but the unsubtle poke towards current affairs feels a little contrived.

Kruger and Schoenaerts are two of Europe’s finest exports and there is a certain electricity between them; however, both the story and direction – from the midway point onwards – leave chasms they simply should not have to fill themselves. A tantalisingly ambiguous ending can add spice to the end of a thriller but here frustrates rather intriguing, feeling more like an afterthought than a worthy addition to open out the piece. Despite Disorder‘s faults it’s hard to condemn the haphazardness of proceedings entirely. Moody, muted colours, thundering rainstorms, efficient use of darkness and light and confining the majority of the running to four walls all work very well but this could, and should, have been so much better.