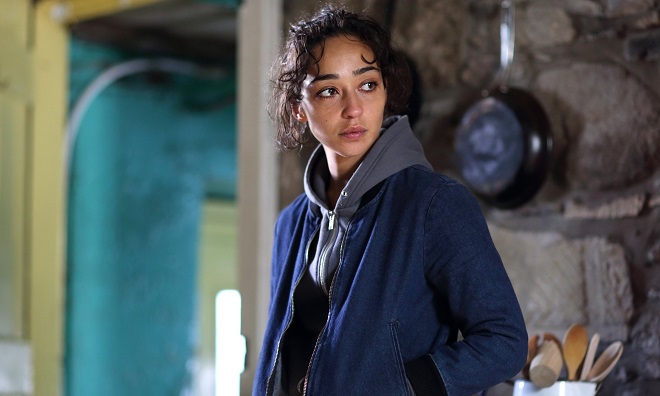 Scottish director Scott Graham follows up his impressive, underseen debut Shell with Iona, a similarly sombre tale of isolation and familial relations. A film inspired as much by the dark sophistication of Carl Theodor Dreyer’s Ordet as the spiritual clash of cultures in Peter Weir’s Witness, Graham’s rural study of guilt, faith and redemption is swaddled in an alluring mist of mystery yet lacking in narrative lucidity. The film’s title refers to both its central character and its Hebridean setting. The story begins with Iona (Ruth Negga) and her son Billy (Ben Gallagher) on the run, travelling to the remote island she’s named after.

They’re clearly fleeing from something, a fact confirmed as they burn their car before boarding the ferry. Although Iona begins with the intensity of a thriller, the film’s flirtation with genre filmmaking quickly comes to an end once the pair arrive on Iona and encounter the island’s close-knit religious community. We soon learn that Iona was raised on the island. however, her unexpected return has dredged up some bad memories connected to the vague and, quite possibly noxious, relationship she shared with her step-father Daniel (Douglas Henshall). Once again, Graham has opted for an organic aesthetic to shape his film’s sense of place, allowing the secluded and picturesque landscape of the Hebridian islands to generate their own atmosphere of spiritual liberation.

The gentle pace of island life means the film rarely exceeds a gentle saunter, with the conflict that simmers below the surface muted by a lack of non-diegetic sound. Indeed, the one scene where music is present, a ceilidh at the local church, the audience is provided with a rare instance of emotions being allowed to bubble to the surface and the frostiness that underlined Iona’s arrival is allowed to ignite into a brief outburst of hostility. Cinematographer Yoliswa von Dallwitz uses the angelic sunlight of the island’s long summer hours to create a crude approximation of heaven and a fitting backdrop to frame Iona’s journey. Resisting any unnecessary embellishments and creating a rural portrait of a community frozen in time, Dallwitz enhances the feeling that this is a land suspended somewhere between the past and the present, entirely overlooked by the encroachment of modernity and a fitting sanctuary for the runaways.

Despite additional cuts having been made since the film’s premiere at the Edinburgh Film Festival, the carefully calibrated intensity of the intro fizzles out midway through the second act, with Iona’s clarity of purpose diminishing and leaving only a sense of bewilderment in trying to trace the intentions behind their escape to this strange, seductive island. Sadly, any interest in Iona and Billy’s plight peters out long before the film’s overly dramatic final and despite some solid technical work and commendable performances, what begins as an intriguing study of moral isolation and a spiritual search for forgiveness in an increasingly secular world ends up a disjointed and frustratingly incoherent film.