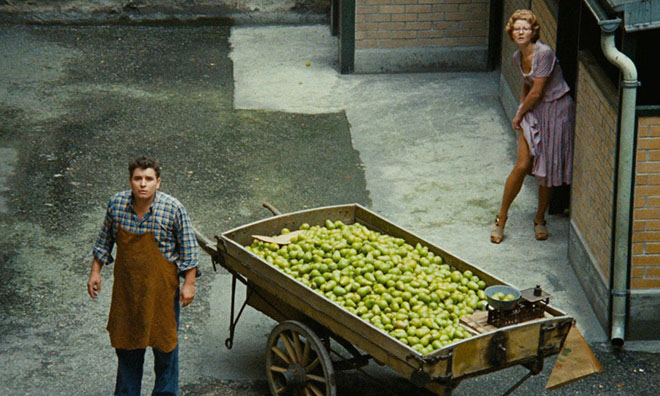 Producing more work in his short fifteen-year career than most directors do in a lifetime, German director Rainer Werner Fassbinder is emblematic of the New German Cinema movement, and remains a powerful voice of avant-garde European cinema. In the first of a new collection, Arrow Video bring us ten of Fassbinder’s most interesting pictures, starting with two films made in 1971 – The Merchant of Four Seasons and Beware of a Holy Whore.

The Merchant‘s protagonist, Hans Epp (Hans Hirschmüller), a fruit seller from Munich, is on paper a pitiful wretch: filled with self-loathing, he cheats on and beats his wife, barely acknowledges their daughter, and ruins a career in the police by allowing himself to be seduced by a suspect. However, as the eponymous four seasons pass, Fassbinder moves the audience into something approaching sympathy for Epp, without ever excusing his reprehensible behaviour. As a mainstream audience, we might expect his sister Anna’s line to Epp’s daughter, “not everyone has always been nice to your daddy”, to have greater narrative import than it ultimately does. It might suggest a climactic twist about some parental abuse perhaps, but Fassbinder is uninterested in such emotionally manipulative sleights of hand. Instead, he shows us a portrait of a full man, capable of both tenderness and violence, of great confidence and of terrible self-doubt. The Merchant of Four Seasons is often a difficult watch with little opportunity for respite, but it is also a rewarding, challenging and worthwhile one.
Where The Merchant presents a man’s life descending in ever-decreasing spirals, Fassbinder’s earlier film, Beware of a Holy Whore shows us one in complete inertia. Based on his experience making Whity the previous year (Fassbinder directed a staggering eleven films between 1969 and 1971), Beware rejects narrative conventions by telling a story in which almost literally nothing happens. Film director Jeff (Lou Castel), a thinly veiled analogue for Fassbinder, arrives late on his own film set to find a woefully unprepared cast and crew who spend their time getting strung out on drink and drugs and casually sleeping with each other. Cue much screaming, shouting and tantrum-throwing from Jeff and his crew, while everyone does their utmost to not do anything at all. Frustration is the key word here: it’s the dominant emotion felt by the characters, but by the audience too, as we will the onscreen production to life, begging for narrative momentum.
Occasionally, things seems to get moving, Fassbinder’s camera springs to life in nice compositions and meticulously-choreographed dolly shots, before someone upsets Jeff’s delicate sensibilities and everything collapses again. Fassbinder denies his audience the salve of forward motion, forcing us to participate in the stagnant nightmare of Jeff’s stillborn project; rarely has artistic conception and execution merged so well on film. Beware of a Holy Whore is a deeply personal film to be admired from a distance if not directly enjoyed, with its final moments proffering a kind of catharsis, but one which is frustratingly just out of reach.