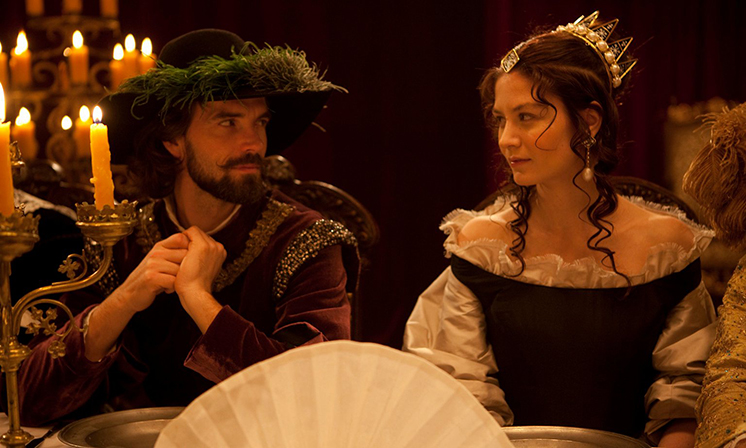 This latest film from Finnish director Mika Kaurismäki makes an adolescent drama out of the true story of 17th century Queen Kristina (Malin Buska), who became Sweden’s first native female sovereign aged just six. Amidst an ongoing European conflict between Catholics and Protestants, she grows up in a conservative Lutheran court and the tutelage of Chancellor Axel (Michael Nyqvist), but emerges a rebellious figure. She clashes with her abusive mother and her sceptical advisors at court on finding peace in Europe, at the same time shunning suitors and instead exploring her attraction to the Countess Ebba Sparre (Sarah Gadon).

The production made a pragmatic decision to film most of prolific screenwriter Michel Marc Bouchard’s French-language script in translated English. Without wanting to be harsh, it certainly shows. It’s consistently stiff and expository dialogue demeans the character development at the expense of politics. It’s not the only clumsiness on display. There’s a borderline annoying obsession with visual metaphors such as a single lioness bust – she needs a husband, you see? – which the script then feels the need to explain. By the time Kristina crashes a wedding dressed as a shepherd, leading a herd of sheep before declaring “Am I not the shepherd of the nation?” you’ll roll your eyes at how often the film works against its own potential.

In a world of manifold Disney princesses with similar rebellious streaks, refusing to conform to the standards of their predecessors, this true story isn’t ultimately that remarkable. By focusing so acutely on the personal intrigue, Kaurismäki and Bouchard fail to give the needed international and historical weight to feel truly momentous. Still, the strength of the performances can’t be doubted. Lead Malin Buska carefully balances Kristina’s youthful intellectual ambitions and emotional confusions. Her intensity provides a character who is not satisfied with her country’s Lutheran limitations, but seeks to understand and use her emotions as much as she submits to them. Nyqvist is similarly solid as a mentor who gradually becomes less helpful to Kristina despite his caring for her.

Kristina’s correspondence and friendship with the philosopher René Descartes (Patrick Bauchau) is the film’s most resonant storyline, where the theme of order vs. free will gains religious and scientific significance. It’s when the film feels most connected to its time period, and therefore at its most genuine. The attempt to make an intimate, multi-stranded story out of this royal episode is appreciated, especially given its subplots which effectively compare with Kristina’s own struggle between independence and duty, but the gripping central performances lack a proper foundation.
Jordan Adcock | @jordanreview