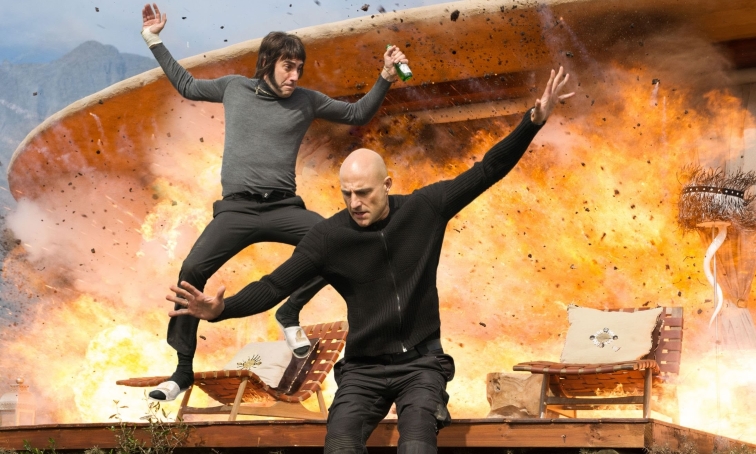 Sacha Baron Cohen has found fame and notoriety playing out our collective prejudices in living, breathing form, in order to make us realise how untenable they are. Borat’s social satire worked because of its mockumentary form; even as Baron Cohen played a ridiculous Kazakh journalist, he gained some all-too-true reactions from his interview subjects, showing an America too comfortable with its own bigotry. After Bruno and The Dictator, his next outrageous character is Nobby Grimsby, his new target James Bond and its suggestive/squeamish, middle-class treatment of sexuality. Except he’s been cut and pasted into a sub-90 minute Johnny English sequel, starring Mark Strong and directed by the journeyman who brought us 2008’s Incredible Hulk and the Clash of the Titans remake.

As Nobby tracks down his long lost secret agent brother (Strong), ruining his missions and trying to reconnect him with his Northern roots, you sense the grotesquery is there less to serve a point about not being snooty towards working class people, than that point being a thin excuse for overstretched gross-out humour. Put it like this: Mark Strong getting repeatedly punched in the face by an elephant’s penis, whilst hiding in another elephant’s arse (don’t ask), is horrifying, and not in a good, secretly enlightening way that Baron Cohen probably intends it to be, co-writing the film with Phil Johnston and Peter Baynham. It’s also clear that such crudity is the only comic level on which Leterrier feels comfortable working, because he can’t enhance the script’s foul mouth. He’s most in his element doing the kind of straight gritty spy action which the film should be lampooning. Not that it’s the best proving ground, but watching these scenes just makes you think how great a genuinely good, Mark Strong-led action film would be. His competent spy attempting to deal with his yobbish relation is actually funnier than Baron Cohen is. But there’s only so much Strong can do.

The biggest contrast to Borat is that Nobby doesn’t even have a steady stream of fictional targets to act off of. Apart from Gabourey Sidibe as the hotel worker Nobby’s suddenly attracted to, it’s up to Isla Fisher, Ian MacShane and Penelope Cruz in very basic roles to provide the disgusted reactions to his latest scatological gag, while being somewhere else entirely. That’s not enough? How about timely Donald Trump references, tied to some very untimely AIDS gags? Or how about a few gay jokes? Grimsby fails in its satirical mission due to a hodgepodge of generic action and ill-advised comedy.