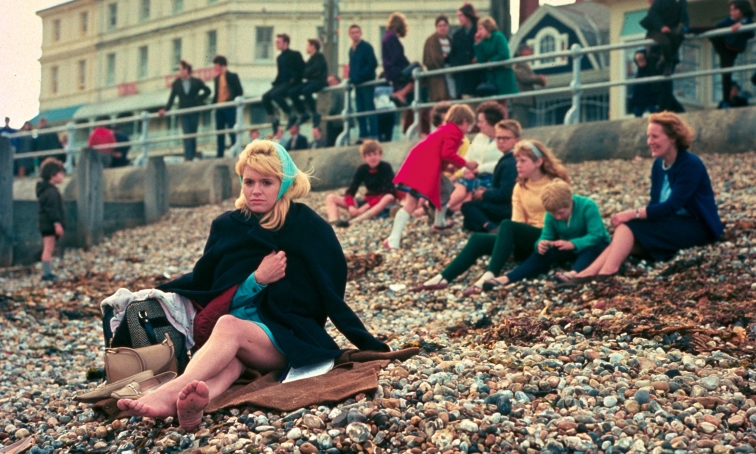 1967 was the year of Carry On Doctor, Quatermass and the Pit and two James Bond movies. It also saw the feature debut of acclaimed television director Kenneth Loach with Poor Cow, starring Terence Stamp, fresh from his first brush of Hollywood fame and Carol White, who had starred in the television drama Cathy Comes Home that had propelled both its star and director into the national limelight. Based on Nell Dunn’s novel – Loach had used her work before in another Wednesday Play Up the Junction – Poor Cow tells the story of Joy (White), a working class young mother whose progress through life seems beset with woes.

The very first shot gives us a graphic and bloody birth scene as Joy gives birth to little Johnny. The father and sometime husband is a sporadically abusive thief called Tom (played by real life underworld figure, John Bindon). At first, he manages to provide a modicum of comfort for his wife and child but when a robbery goes wrong is sent to jail leaving Joy to fend for herself. First staying with her auntie Em, Joy gets by on money from the social security and bar work. A romance with an old mate of Tom’s, Dave (Stamp) provides Joy with a some genuine affection and love, but alas Dave is a bit of a crook as well and the romantic interlude proves all too fleeting. Loach’s debut is a striking piece of work. One of the surprises to those who only know Loach in his more recent manifestation is how apolitical the film is.

Joy is to some degree a victim of circumstance, but she isn’t really a victim of the system. In fact, she’s as often a manipulator of it, using her wiles to get herself money and perhaps a step up on the housing list. Joy is totally aware of the criminal life her husband and then boyfriend leads, but far from disapproving, she encourages them, suggesting Tom do a job more or less as soon as he gets out of prison. Dave might well be a sweeter and more considerate man, but his criminal past is recited in court and it is mixed with violence and nastiness. Tom’s denunciation of society as “all bent” is about as ideological as it gets, but given who the mouthpiece is it’s unclear how far we’re supposed to listen to this as any more than an old lag’s self-justification. Of course the lack of dogma is in itself as political choice and in this sense can be seen in Joy’s increasing promiscuity. Although prostitution lingers as a possibility which even Auntie Em dallies with, Loach (and Dunn) refuse to go the moral high ground.

There are predators and perverts lurking and a particularly seedy ‘modelling’ session, but Joy retains her own sexual identity and hearing her chatting with her friend about her own excitement and pleasure is – given its time – groundbreaking. Another surprise is how dynamic and experimental Poor Cow is. The failed robbery is filmed with brilliant immediacy and excitement and inter-titles break through the documentary style with a dash of Godardian elan. The Donovan soundtrack is very much of its day, but the songs provide a commentary that Loach’s later more austere films would never allow. The acting all round is as naturalistic and compelling as you would expect from Loach’s television work, but White – the Battersea Bardot – stands out as a brilliant and compelling performance. Her Joy has her flaws and is often the author of her own misfortunes, but she is a fully-realised creation, a character with depth who commands sympathy, even when she would probably throw it back in your face.