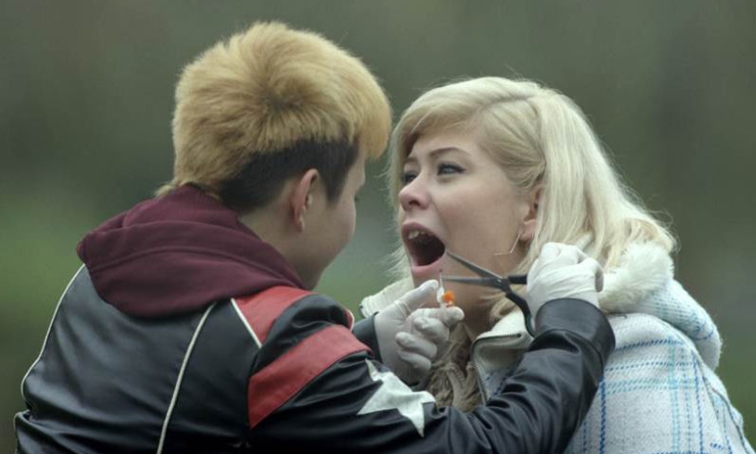 There’s a distinct whiff of Mike Leigh running through Waves, the fiction feature debut of Polish director Grzegorz Zariczny. A social realist drama about the difficulties facing working families, it is constructed with autobiographical details proffered by its non-professional lead actresses who also work-shopped improvisation within the narrative structure. That its focus is on the generation of forgotten youth, currently disenfranchised and vulnerable across Europe – the same remit that stoked many of the fires of the legendary Czech New Wave – perhaps gives a clue as to how its made its way into competition at Karlovy Vary.

“The waves must be formed from the very top to the very bottom,” explains the invigilator in Ania (Anna Kesek) and Kasia’s (Katarzyna Kopec) hairdressing exam. This ‘up’ and ‘down’ symbolism is present throughout the film but most notably in a neglected half-pipe in an desolate playground in the Nova Huta district of Krakow. Like the metaphorical sinkhole that the characters are stuck in, at the beginning of the film Ania cannot seem to claw her way up the side of the pipe onto the platform, but as her sense of self-worth and self-determination grow, she manages to scale it with ease. When the half-pipe serves as the setting for a conversation with her estranged mother (Beata Schimscheiner) their relative positions on screen, and the spatial conclusion of their battle of wills says more than any dialogue could.

Fortunately, the screenplay is incredibly naturalistic, anyway, adeptly capturing the two girls’ characters while letting exposition sneak out organically. Their most telling dialogue comes when they are alone, which is when they both feel most at ease. It says a lot about Zariczny’s directorial skill that he manages to get two such assured performances from unseasoned actors – Kesek in particular conveys so much so deftly, perhaps her rawness aiding her conviction. The quiet awkward smiles that she allows herself in the two moments that people compliment Ania are rays of sunshine that penetrate all of the gloom around her. Homelife is tough for both her and Kasia. Divorce, domestic violence and alcoholism have sucked the colour from family.

Weronika Bilska echoes their hardship with her beautiful but harsh photography of Nova Huta; a stark environ, a reminder of communities denied opportunity and battling for scraps. For Ania and Kasia, their hairdressing apprenticeships are their way out, a welcome respite from the daily grind. For as grim as it can feel at times, Waves is a spot of hope that these characters will be able to clamber up onto the platform and won’t be left scrabbling at the rusted sides of the half-pipe.