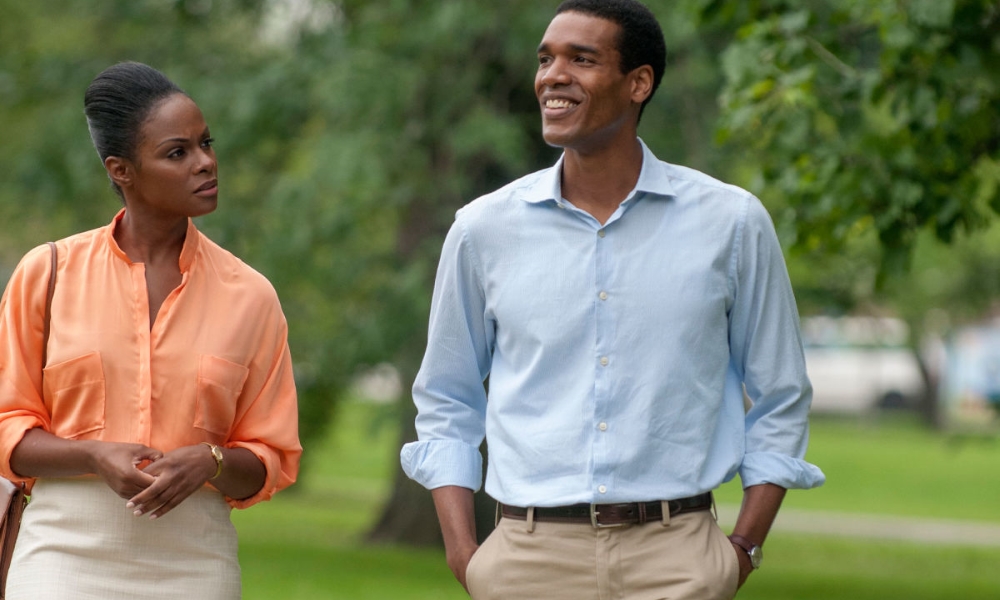 Southside with You is the film equivalent of a comfortable pair of familiar shoes, the feeling of sitting down into a cosy chair, or the first sip of a cup of tea – it’s ‘nice’. That is to damn with rather faint praise. This may not be one for the ages, but there is a lot to like about Richard Tanne’s debut feature. In a sprightly 80 minutes it recounts one of the most significant first dates in history: that of a tall, feisty, intelligent and principled knockout named Michelle Robinson and Barack Obama, a sincere, smooth-talking, disorganised yet charismatic young lawyer who’s so laid back he’s practically horizontal.

The responsibility of playing the soon to depart President and First Lady of the US of A falls on the shoulders of Parker Sawyers and Tika Sumpter. Each actor does a good job of subtly showing characteristics we now take for granted in the Obamas: Michelle’s brilliance and tenacity, Barack’s affability and resolution. They fill the screen with warmth, big smiles, longing looks and charisma, generating enough sparky chemistry to stop the whole affair from being overly saccharin. Events occur more or less in real time but anyone hoping for something of the Jack Bauer here should prepare themselves for a walking paced romantic biography which wears its heart on its sleeve.

Michelle’s resistance to her attractive suitor and insistence that their spending the day together does not constitute a date continues for the most part, proud as she is of her status and standing within their firm. Hearing Barack describe a piece of cake as “a slice of heaven” one wonders whether the real life man’s chat up lines were quite as corny and there are moments where the schmaltz is layered on pretty thick. A blurring of the screen around them as they deliver such clichés pushes the sickly sweetness a little too far. It is at a church meeting, where Barack speaks to a congregation of their plight to obtain a community centre, that his eloquent but slightly goofy nature begins to win Michelle over, aided by the unadulterated praise of a couple of local ladies. He buys her an ice cream and that really seals the deal.

Southside with You doesn’t leave a lasting impact because it plays all elements altogether too safe. Racial intolerance, family struggles, sexism, physical attraction, emotion, language, difficulties of class and neighbourhood are thrown loosely into the mix but are dialled down to such a degree that they exist at a mid-range simmer at best. However, that’s not what Southside with You is meant to be. It’s more a walk through the park than the ghetto; a love letter to the humble early flutterings of love between a couple who have come a very long way – and achieved a great deal, together – since their first meeting and the city, Chicago, where it all began. Sit back in that big armchair and enjoy it for what it is.