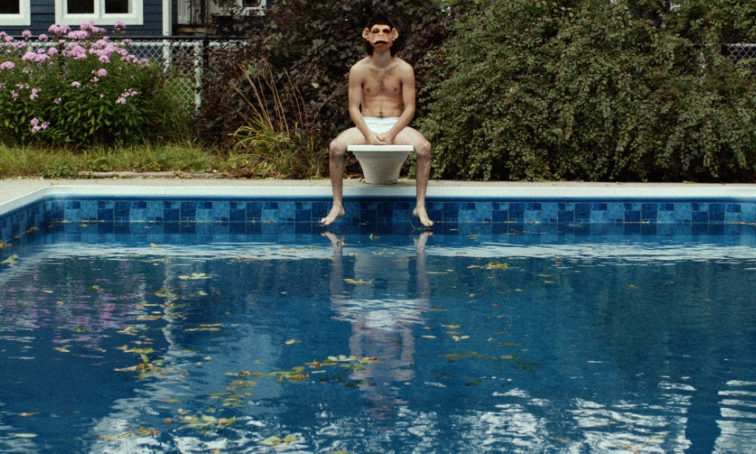 Showing in the Critics’ Week sidebar at this year’s Venice Film Festival, Vincent Biron’s Prank is a coming of age story that never quite escapes the constraints of its own claustrophobic Quebecois world. Stefie (Etienne Galloy) is a gormless teenage loner who spends his spare time practicing the clarinet – the similarity to Ferris Bueller stops right there – and throwing a ball against a wall. He’s befriended by a pair of slightly less gormless teenagers Martin (Alexandre Lavigne) and Jean Sé (Simon Pigeon) who get their kicks filming pranks they pull on the public – if only they had a phone with a camera.

The group opportunistically befriend Stefie and the fun begins. These jokes can go from the shop worn and harmlessly zany, like running into a supermarket dressed as a dog, to the more obnoxious and puerile, for example taking a shit on a sports car. As can be seen from these two examples, they are all fairly lame and, obviously, adolescent. There’s no anger here, or sense of a countercultural rebellion as in Fight Club, but it’s hard to imagine any of these pranks getting many hits on YouTube either. When Martin’s girlfriend Léa (Constance Massicotte) shows up, Stefie begins to feel stirrings of pubescent longing. Martin is, after all, an asshole, even though as Jean Sé insists: “He’s a good asshole”.

The group dynamic is further compromised by the suspicion that although Martin thinks up many of the jokes, he always seems to be the first to leg it and leave others to deal with the consequences. And Stefi is never quite sure if he is a fully-fledged member of the gang or a potential stooge. The kids hang around and chat aimlessly and some of the aimlessness of the film, like the lameness of the jokes, could be interpreted as a fairly realistic reflection of bored teenage disaffection. The problem is that this doesn’t make for a very compelling movie. We have the obligatory drugs scene and first time Biron seeks to liven up proceedings visually whenever he can.

Biron does so by way of a series of vignettes showing the victims of some of the pranks living their own problems and lives and for whom the practical joke is simply an annoying interruption. Some of the best comedy comes from these collateral characters. It also indulges in a series of retellings of cult actions movies like Die Hard and Highlander, complete with artistic renditions provided by Jean Sé, who turns out to be a bit of an aficionado of film and even forces the others to watch Bela Tarr’s The Turin Horse. Prank is a slight work, likeable at times, but lacking the real energy and original cut of youth.