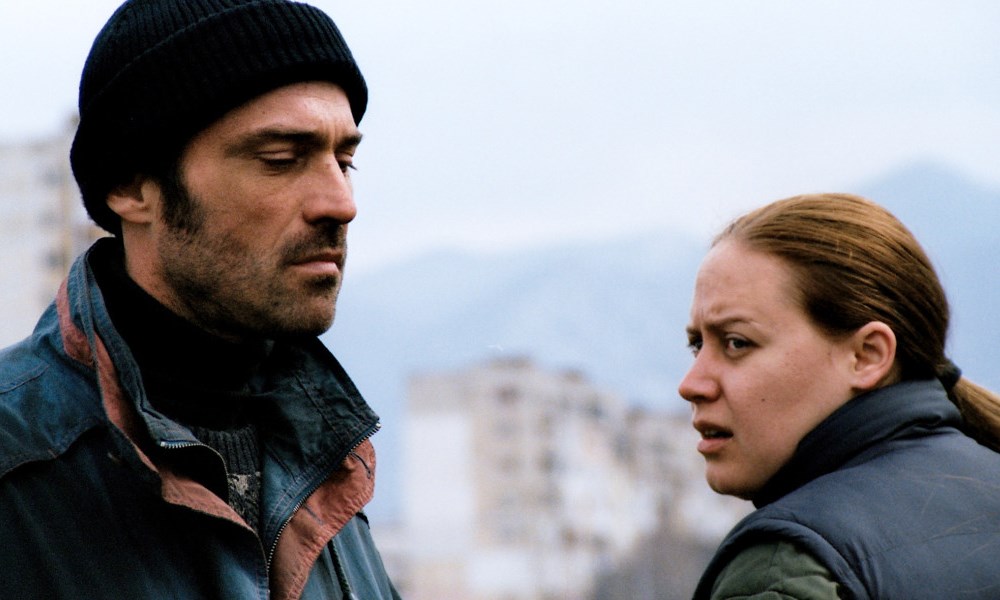 Ralitza Petrova’s Locarno Golden Leopard winner Godless is the latest in an outpouring of punishing portraits of life in the New East. Rigidly conforming to the stark, unforgiving aesthetic now synonymous with post-soviet social realism, Petrova’s debut is a gruelling exploration of the new political and cultural identities being forged in Bulgaria following the transition from socialism to a market economy.

Godless opens in a cave somewhere in the Northwestern province of Vratsa where an unknown man has been strung up by his feet and left for dead. Why? It might have something to do with Gana (Irena Ivanova), a nurse who looks after elderly patients suffering from dementia. She appears tragic, bordering on the pathological, seemingly disenfranchised with life due to the physical and psychological demands of her job. However, it transpires that Gana is addicted to morphine, and has been stealing her patient’s ID cards and selling them to a local gang who use them for money laundering purposes. The raw, unflinching misery of Godless’ plot is accented by some austere and implacably desolate cinematography. Shot on celluloid in academy ratio, the handheld camerawork is uncomfortably intrusive, creating a claustrophobic portrait of a world veiled in waning concrete architecture.

The film’s palette of hopelessness is unchanging, with Petrova favouring extreme close-ups of sullen faces, over pedagogical dialogue, with this penchant for tight, constrictive framing forcing the audience to consider the wider sociopolitical forces at play. Gana, a healthcare worker turned black-market criminal, shows how even the most upstanding member of a community can turn against their morals when they’re failed by society. She shows little remorse for her actions and even as Petrova’s camera’s chips away at her callous veneer all that’s revealed is a passive mix of resignation and rage. The one glimmer of hope in Gana’s bleak existence is Yoan (Nalbantov), one of her more well-adjusted patients, who runs an amateur choir that sings religious hymns. Yoan, who was imprisoned during Todor Zhivkov’s regime for political dissension, becomes Gana’s only confidant and in one conversation between the two we get a fleeting glimpse into her past.

However, this moment of tenderness doesn’t stop her from stealing his ID card, with Yoan finding himself falsely accused of money laundering. Petrova clearly wants to articulate that little has changed in Bulgaria since the collapse of the Eastern Bloc, yet the epidemic corruption of a post-communist state unaccustomed to the competitiveness of a market economy is a subject that’s already been reflected in the cinema of the New East multiple times. Sadly, unlike the works of Cristi Puiu, Andrey Zvyagintsev or Cristian Mungiu, who extract a visceral truth from the post-soviet landscape by decontextualising themes of transition and national trauma by positioning them against universal questions about guilt, complicity and the dangers of nostalgia, Godless lacks the same nuance, ultimately feeling myopic and at times too formulaic. It certainly isn’t without it merits, and there are countless flashes of visual inventiveness and moments of incidental conversation that speak to a larger facet of Bulgarian consciousness.

At first, Godless feels like a name chosen to reflect Gana’s lack of faith in a system that has failed her so irrevocably. However, in the final moments it’s revealed ‘Godless’ is the name of a nearby mountain where, during the 14th century Ottoman invasion, a local priest shepherded his parishioners to the summit, believing they would be safer if they were closer to God. Unfortunately all he did was leave them without an escape route and, in the end, they were brutally slaughtered. It’s a fittingly morose allegory for a film saturated by misery and despair, but at least there’s enough here to suggest there’s a brighter future in store for Bulgarian cinema.