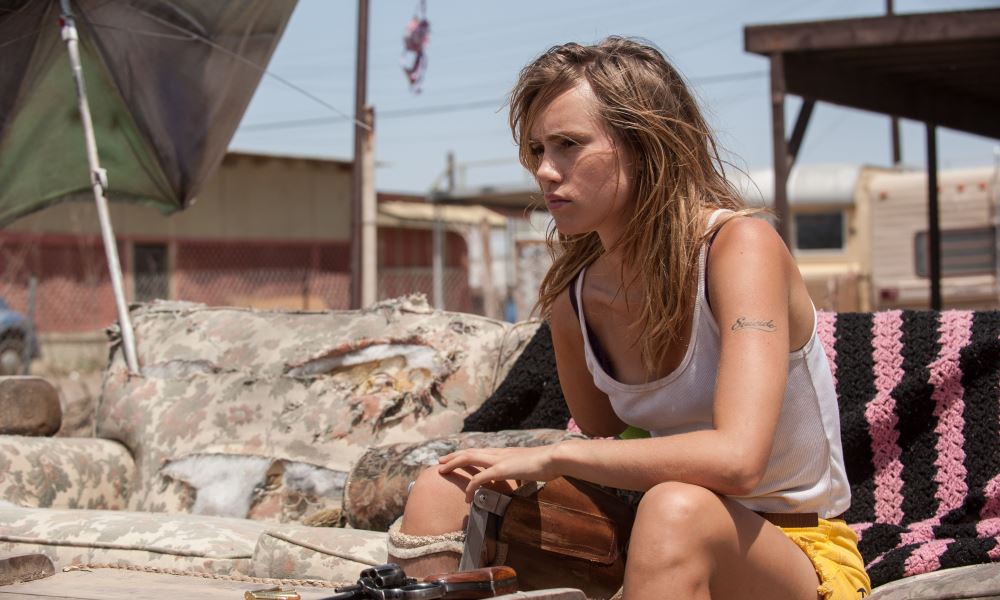 Following on from her stylish and well-received debut A Girl Walks Home Alone at Night, American-Iranian Ana Lily Amirpour returns with The Bad Batch (Netflix, 22 Sep), a post-apocalyptic cannibal movie that devours its influences without ever getting to the red meat.

Suki Waterhouse plays Arlen, a girl with a cherry tattoo and a Tank Girl-look who’s been branded and expelled from a desert compound. A sign hanging on the fence informs her that she’s leaving the territory of the United States. The ‘bad batch’, we later learn, are the rejects who have not passed muster. The criteria is vague but ‘intelligence’ is mentioned and Arlen is – as the Oracle says of Neo – “not too bright”. Arlen wanders the desert without a care in the world, fixes her makeup in a car wreckage and promptly gets herself captured to ‘Bridge’ by bodybuilding cannibals who begin to dismember, grill and eat her. So far, so promising – grisly, bloody and surprising.

Arlen shows some cunning in making her escape and is rescued from the desert by wandering bagman Peter (played by Jim Carrey in a dumbshow cameo). Carrey’s role throughout the film is essentially to pick up the loose ends of the plot and fix some, but not all, of the weaknesses of the screenplay. Arlen finds sanctuary in a compound called ‘Comfort’, which is where hipsters go when they die. There are skaters, tattoo artists, hippies, its own resident DJ, an abundance of electricity, a lady who cooks noodles and a twitching Giovanni Ribisi.

Here, Keanu Reeves’ Rockwell – looking like a mixture of Hugh Hefner and Pablo Escobar – rules Comfort with a posse of uzi-toting pregnant women. He also lays claim to organising the sewage system: “So we take the shit away”. Many a reader will be looking at this colourful synopsis and thinking “This sounds great – crazy, but great”. The first ten-to-twenty minutes are, as noted before, brilliant. But having set up such an interesting premise in establishing the two camps – the musclebound cannibals and the drug-fuelled, well-armed hippies of Comfort – Amirpour seems uncertain what to do with them, so has her character wander off in search of a plot which she duly finds in a garbage dump. In belated revenge for losing an arm and a leg, Arlen kills a scavenger from Bridge and takes her little girl back to Comfort.

The girl’s father Joe (Jason Momoa) sets out to get her back, though he has no way of actually doing so. For some unexplained reason, the Bridge cannibals only have knives and the Comfort hippies are tooled up in the firearm department. Fortunately for Joe and the screenwriter, Arlen drops a tab of acid called ‘plot convenience’ and wanders off into the desert once more. Here the leaden pacing begins to tell. Drugs are great: watching someone on drugs less so. It goes on forever. Spaghetti Westerns sometimes indulged in slow buildups but Amirpour’s longueurs don’t lead anywhere. In The Bad Batch everyone hesitates ten seconds before speaking and every scene is seemingly three minutes too long.

The symbolism here is literally signposted, with directions reading ‘This Is Not Real’, and there are numerous references to dreams – perhaps to explain the dreaminess of the pace – but fantasies aren’t this dull and can even be interpreted so as to mean something. It doesn’t help that Waterhouse’s performance struggles to convey simple behaviour convincingly – such as thinking about stuff or caring what happens. Amirpour is a talented director with a wonderful eye but her style lacks substance and her obvious influences – the Mad Max franchise and the wonderful LQ Jones film A Boy and his Dog – are so superior as to almost completely nullify her derivative contribution to the genre.