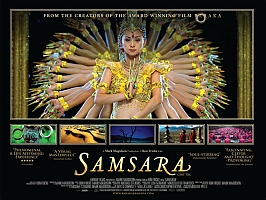 Following 1992’s acclaimed Baraka, groundbreaking director Ron Fricke presents his latest feature Samsara (2011), a similarly mesmeric, non-verbal meditation about the invisible bonds shared between humanity and nature. Lacking any tangible narrative structure, Fricke has substituted conventional storytelling for a beautifully-woven tapestry of profoundly striking images that creates what can only be described as a cinematic work of art.

Capturing the essence of human existence and seamlessly connecting it to the evolution of the world that surrounds us, Fricke examines our species’ collective hopes and desires by creating an ethereal journey of the soul. Synchronising our lives with the rhythm of the natural world we depend upon, Samsara (a Tibetan word that means ‘The ever turning wheel of life’) is a sumptuous excursion into the realm of metaphysical cinema, told through a hypnotic and incredibly poignant existential viewpoint. 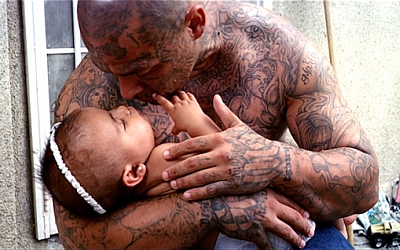 Fricke is renowned for his pioneering use of time-lapse photography and Samsara is yet another example of his masterful use of this distinct approach. Combined with a powerfully emotive score and filmed on 70mm, Fricke’s vibrant palette of opulent colours and rich imagery creates a profoundly moving experience, with each frame as captivating as the one that precedes it. That said, there are certain vignettes that standout as truly remarkable, particularly one scene which observes the Muslim Hajj pilgrimage to Mecca, gloriously capturing the enormity of the event as it unfolds.

Samsara’s non-verbal style and reliance on images to impart its indistinct and ambiguous message may sound like a gruelling chore, yet surprisingly Fricke’s high brow approach never feels remotely tedious or overly pretentious. Admittedly there are those who’ll struggle to buy into Fricke’s excessively artistic approach. However, for those receptive, each painstakingly shot sequence and beautifully rendered frame speaks volumes – presenting a fascinating riddle of humanist metaphors and allegories.

Less a ‘film’, more a cinematic excursion into numerous existential and spiritual ideas, Samsara certainly won’t be for everyone. Yet anyone prepared to become absorbed in Fricke’s latest experiment will be richly rewarded with an intoxicating and hypnotic experience, perfectly adapted to its chosen form.