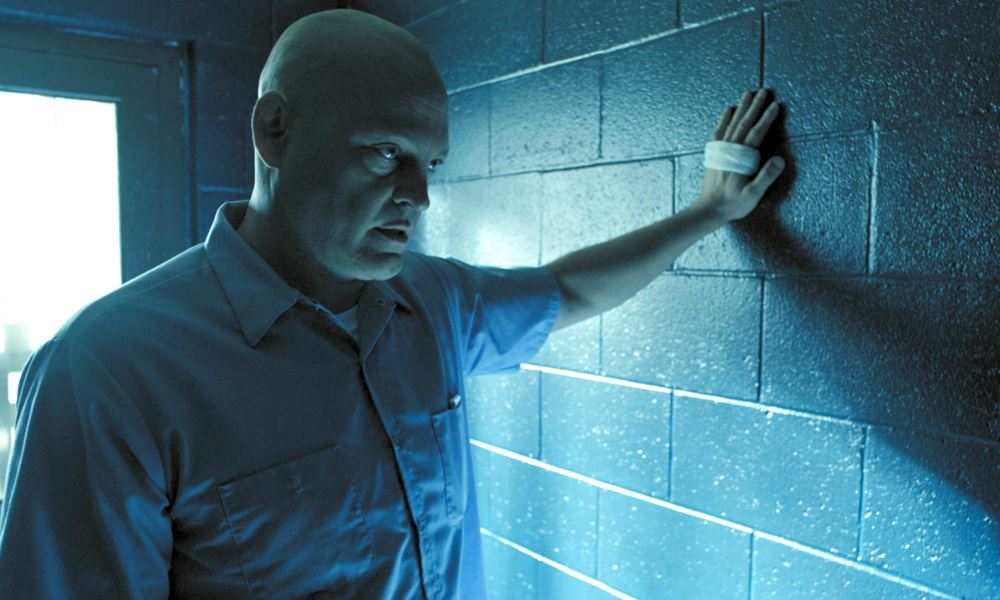 Fans of Bone Tomahawk won’t be disappointed with director S. Craig Zahler’s bone-crushing, face-smashing, slow-burning genre mash-up Brawl in Cell Block 99. It stomped onto the Lido with a swagger and boasts a thumpingly good performance from Vince Vaughn.

Bone Tomahawk was a bold debut. Half-John Ford Western, half-Ruggero Deodato gore-fest. Brawl on Cell Block 99 is a worthy follow up, a dark comic thriller which breaks through genre barriers and A and B-movie distinctions. It’s also gruesomely entertaining. In a career-best performance, Vince Vaughn plays Bradley (not Brad) Thomas, a hulking ex-alcoholic with a crucifix tattooed to his shaved pate. A car mechanic, his bad luck starts with the film as he loses his job. Returning home he discovers his wife Lauren (Dexter’s sister, Jennifer Carpenter) is having an affair. In a chillingly absurd scene, he orders her into the house and then beats her car to death with his bare hands.

Given the title, the audience would be forgiven for assuming the cops would be called or some heinous escalation was about to ensue but Zahler – two films into his career as a filmmaker – has already proved himself adept at confounding expectations. In fact the first half of the movie unspools as a character piece: a modern day Jim Thompson. Vaughn is given space to build his character as an articulate man – his accent has a gentle Southern lilt – with a dark history and a whole set of contradictions: the tattoo suggests Aryan Brotherhood but he chides his new drug dealer boss for a racial slur. The raging car smashing scene is followed by a restrained conversation between Bradley and Lauren that maturely confronts the failings of the marriage and where to go next.

Skip forward some months and they seem to have come out of the other side of it. A new house, the marriage on firmer ground; money coming in; a baby on the way, but then a drug deal goes badly wrong and Bradley finds himself facing some hard time in the penitentiary. There are some things worse than prison though and with his wife kidnapped Bradley must do things which mean that the chances of an early release for good behaviour are vanishingly slim. As Zahler follows Bradley through the prison system, the movie sheds its realism for a grungier almost gothic aesthetic. Bradley’s move from medium to maximum security before arriving in ‘the prison in the prison’ of Cell Block 99 with Don Johnson in superb form as the cigarillo-smoking, politely-spoken, gun-toting Warden Tuggs is matched by an escalation in violence and pain.

This is a genuine theatre of cruelty with a teeth-cracking sound design, which means even those watching through their fingers won’t be spared and an almost cartoonish fascination in the possibilities of physical destruction. The brawls are hyper-brawls. There’s no art in the martial arts here, but the ultra-violence is stylised like a 1980s punch ’em up computer game: Way of the Exploding Fist. Many will be turned off by the level of violence and the sadomasochistic viewing experience of the final act. And that’s a shame. But for the rest of us Zahler has written an A-Movie screenplay full of nuance and wit with A-movies actors and put it to the service of a B-Movie plot and B-Movie delights. Perhaps to fit in these two movies, the film takes its time at over two hours but this also allows for a host of brilliantly played scenes, like that between Fred Melamed as a pedantic prison guard who haggles with Bradley over his wedding ring: “I am neither a metallurgist nor a jeweller sir.”

In Bradley Thomas, Vaughn delivers a performance whose unlikely anti-hero status hails back to the tough cowboys of Zahler’s first film – he greets everyone with a semi-ironic ‘howdy’. He is also, like them, a husband and would-be father who will do anything to secure his family’s safety. It is weird talking about sensitivity in a movie of head-stomping, but Vaughn’s performance is sensitive. There’s no two ways about it. In addition, like every prison movie, there’s also the delight of the puzzle-solving the captive must do to turn the tables on his captors using only his imagination. Zahler gives Bradley ‘minimum freedom’ in the final circle of his hell, making it more like a dungeon movie than a prison one, but his resourcefulness and wit is matched only by that of the movie itself. Brawl in Cell Block 99 is a midnight movie to relish.