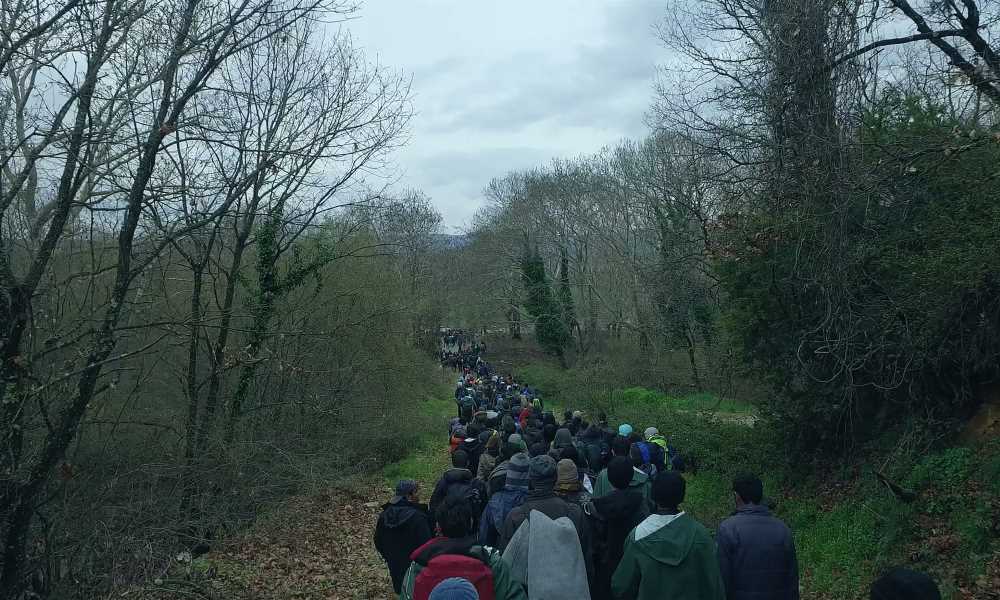 Receiving its world premiere at Venice, dissident Chinese artist Ai Weiwei crosses borders with his wide-ranging documentary Human Flow, an angry and compassionate witnessing of what looks like being the greatest man-made tragedy of our times.

“No one leaves home lightly,” says a female refugee from Iraq. “You suffer hardship just to get to safety.” It is one of the many voices in Human Flow that presents both a panoramic and at once intimate portrait of the experience of the refugee. It’s timely film, as the debate has shifted with the surge in movement from one of occasional sympathy – spurred by images like that of Aylan Kurdi, the drowned child on the Turkish beach – to a callusing of sensibility which has its political expression in the rise of the far-right and its physical expression in the rise of the border walls and fences. When the Berlin Wall fell in 1989, only eleven countries had such physical barriers marking their borders. Now that number is seventy.

This is just one of the many fascinating facts that are regularly proffered, giving an educational gloss. Likewise, a variety of talking heads – mostly from the UN and various humanitarian NGOs – give soundbites. Though physically present throughout much of the film, Ai refuses to editorialise or interrogate his sources, and it’s these more conventional moments which tend to be weakest. The strength comes with his embracing of the ragtag communities themselves and the deep empathy the film has. Starting from an omniscient POV, we see first a migrating pass over the sea and then a dinghy packed with men, women and children. We see them land in Greece. With the conflict in Syria and Iraq, these are basically entire countries on the move with people of all ages from babies to grandmothers. Blocked at the border of Macedonia, the refugees make an improvised camp. Soon, the sound of bronchial coughing can be heard above the sound of the rain and the wind snapping at the inadequate tents.

Many of these people have already suffered unimaginable trauma and the response of Europe is shown to be shambolic and increasingly heartless. In Berlin, a refuge is set up at Tempelhof airport. In Paris, they shelter under a bridge. The UK is only glimpsed through barbed wire. So we don’t see this as exclusively our problem, Ai takes us to other countries taking in people like Jordan and Lebanon, the latter hosting a significant proportion of its population in refugees. In Africa, Turkey, Italy and the United States the story is the same but the human story is always there. Being a refugee is as varied as any other life experience. We see the boredom, grief and fear of course, but we also see how resilient the children are, delighted to run about in the dirt and photobomb Ai’s camera. We see the barbershops, the family bonds, the attempts to retain dignity in hovels with the same colourful shabbiness of litter.

Ai himself is an avuncular, chummy presence. Always the artist, his eye picks out the colour of the discarded life jackets and the strange beauty of the burning oil fields and destruction that many are fleeing. Yet he resists anaesthetising us with aesthetics. The drone shots and POVs all serve a purpose: to enquire, to investigate and occasionally to condemn. Ai’s own stateless status is not mentioned and if anything his privileged position is emphasised as he films constantly with his phone. In one exchange he jokingly swaps his passport with an Iraqi refugee, who more pointedly offers to swap his tent for the artist’s Berlin studio.

With its epic scale and global reach, Human Flow is a powerful testament to a shameful crime against humanity. Whether the causes are warfare, poverty, famine or climate change, the misery and suffering is undeniable. At a time when certain major political movements are determined to deny it and to play the victims for their own plight, Human Flow – like the hashtag campaign Ai participates – in “stands with the refugees”.