Czech100: The White World According to Daliborek review 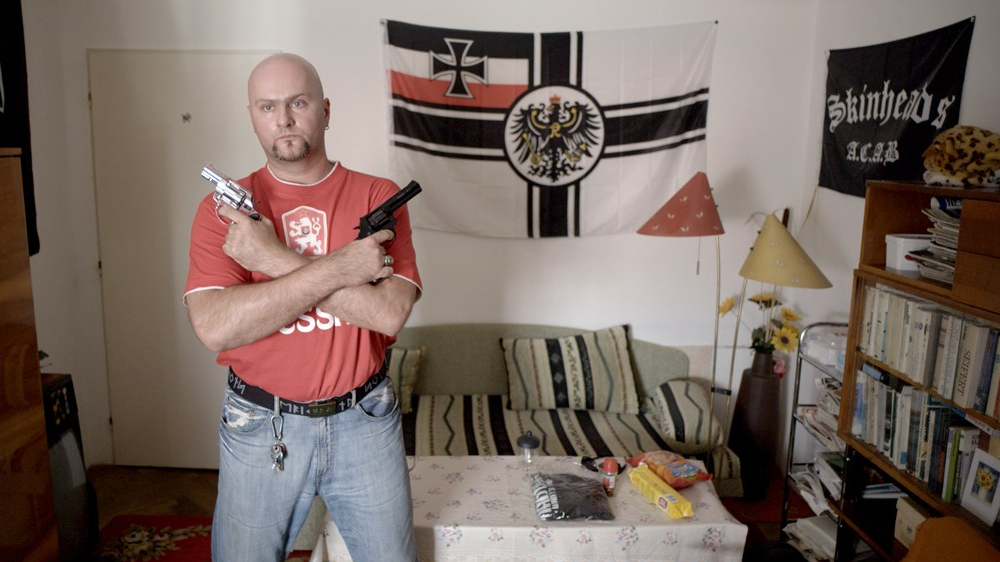 Dalibor K. lives in a small house with his mother. He works a poorly-paid job in a factory, and spends his free time playing video games and making amateur videos on YouTube. He’s also a neo-nazi. Vít Klusák’s documentary is a chilling, tragic and often ugly examination of a lonely, hateful and very confused man.

We’re first introduced to Dalibor through his amateur filmmaking, which falls into the categories of karaoke-style music videos or amateur horror shorts. The common theme throughout them, however, is their espousal of nazi and fascist ideology, ranging from racist diatribes, misogynistic songs and semi-coherent nationalist anthems.

It goes without saying that this is ugly, ugly stuff, yet there’s something almost laughable at the amateurish way he cobbles his films together. It often feels like we’re watching a bored man-child playing at national socialism; Klusák juxtaposes the racist rants with Dalibor gaming with his buddy, before his mother barges into his room to tell him to keep the racket down. It’s clear that the 36 year-old factory worker is in an arrested state of adolescence, throwing a temper tantrum when his mum announces that she’s got a new boyfriend.

The film’s early scenes sometimes feel as if they are pushing Dalibor’s repellent views a little too far to the edges of the frame in order to make him more sympathetic, yet it’s all in the service of trying to understand the psychology of someone like Dalibor. Indeed, The White World According to Daliborek seems to suggest that it is precisely because he is ridiculous that he has proven so susceptible to such a toxic and dangerous ideology.

It’s easy to laugh at Dalibor colouring his eyes red in one of his many militaristic photo poses – the film certainly encourages us too – but there’s a real tragedy to his childish posturing. Dalibor is constantly affecting a hyper machismo that perpetually eludes him: he is a fool, but a useful and potentially dangerous one for the discourses that have poisoned his mind.

It’s less easy to sympathise with him when he’s on many of his racially charged rants, yet even then he demurs when his mother’s equally repellent boyfriend asks him to commit to viciously attacking non-whites. Yet even this specimen, following his boast of a targeted attack on a group of black people, later admits that he worked alongside Muslims in Italy, befriending and even praying alongside them.

It’s as if everyone is just posturing – picking up and discarding their world views when it suits them – which goes some way to explaining why they are so frequently incoherent. A final, gut-wrenching visit to Auschwitz with the family finally exposes the rotten core of Dalibor’s wretched theories, where even his mother’s boyfriend abandons him. In the end, Dalibor is a confused, paranoid and isolated man. He may seem silly, but for the woman who survived the death camp and in the film’s final moments faces him down, the resurgence of views like his are anything but.