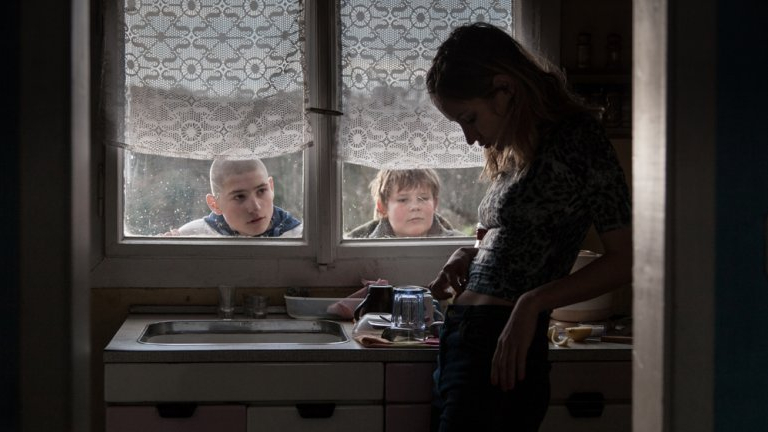 Told through a non-linear narrative and brimming with warmth, Winter Flies is an effortlessly charming third feature from the director of Family Film and A Night Too Young. We are introduced to the film’s young gallants with Heduš in full ghillie suit, hiding at the side of the road to take pot shots at passing cars. It’s a remarkable opener: the machine gun replica he wields is sinister, yet his tuneless humming and the devious little grin he cracks are sweet and very funny.

Fans of UK director Shane Meadows are sure to be right at home here – the neglected, weed strewn roadsides and grey concrete are very reminiscent of the wilted suburbs of Meadows’ films, and Heduš has more than a little of the cheeky boys from A Room for Romeo Brass in him. But the emotional core of the film belongs to Mára, Heduš’ Audi driving partner in crime. It’s implied throughout the film that both boys have less than ideal home lives, but it’s Mára who takes the lion’s share of domestic dysfunction, running away from home to allegedly hook up with a girl in France.

Mára may boast of his amorous conquests, but the real love story is between the two boys, even as they compete to win the affections of the attractive, older hitchhiker they pick up along the way. The real trick up Winter Flies’ sleeve, however, is in its cross cutting between the boys’ adventure and the aftermath, with Mára in cuffs and questioned by the police. It’s in these sections where the humanity of the film coalesces, contextualising the boys’ journey as more than just a delinquent excursion.

The police officer (Lenka Vlasáková) questioning Mára is alternately maternal and devious; in one moment she promises to be the motherly, understanding figure that Mára so desperately needs. In the next, she manipulates his good nature for information, and in so doing proving him that authority figures are not to be trusted. It would be a devastating note to end on, but director Olmo Omerzo rounds it down just enough to take the edge off. It’s a deeply poignant way to leave the boys, and the bitter, defiant optimism of Winter Flies remains sharp and honest while never tending towards the sentimental.