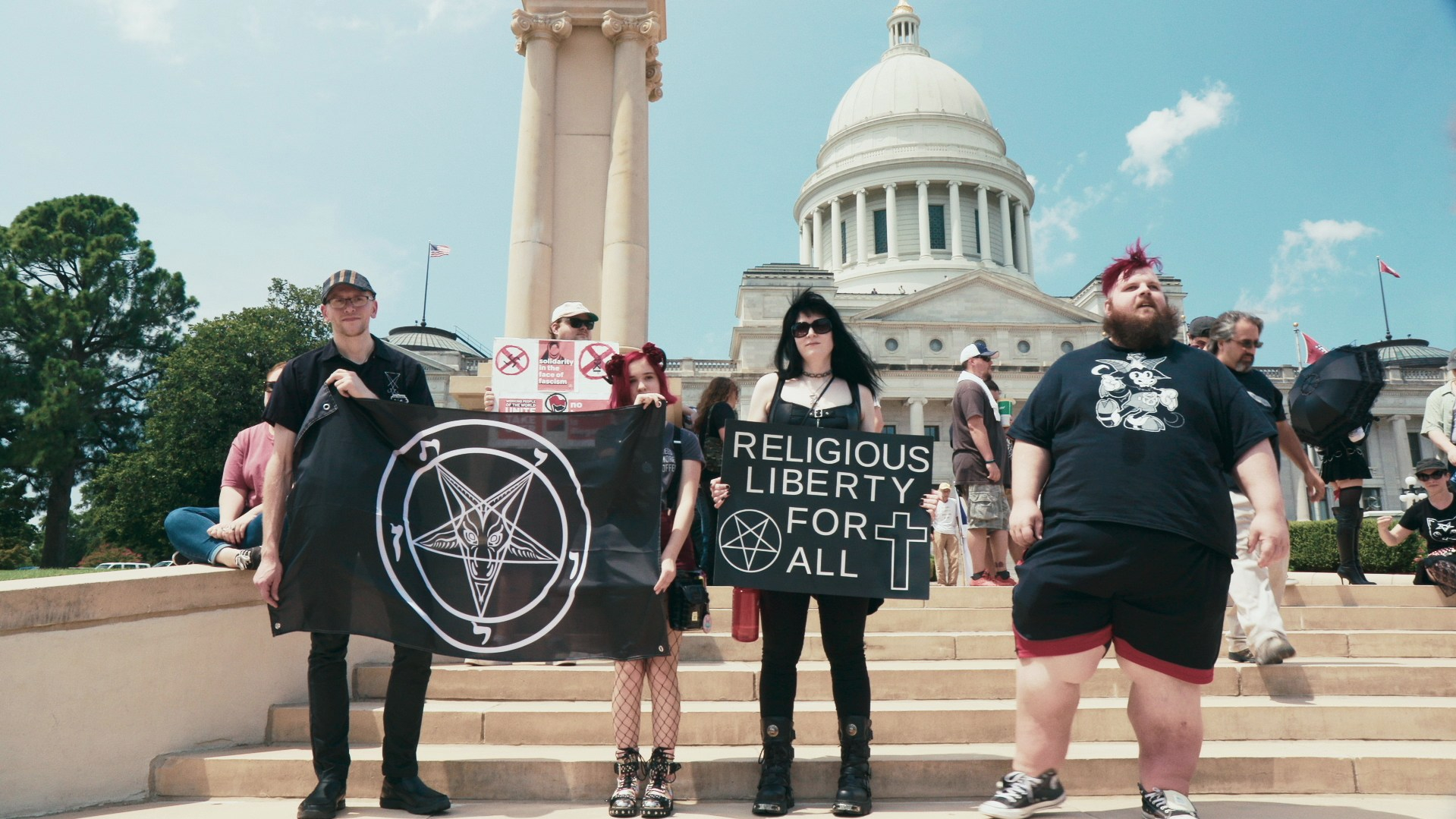 What is perhaps most surprising about the tenets, apparently coming from the Prince of Darkness, is just how reasonable they seem. In our world of post-enlightenment thinking and liberal democracy, notions of compassion, reason and personal freedom sound about as radical as the shipping news. But as the institutions in which so much complacent faith we have invested begin to crumble, director Penny Lane’s diabolical documentary asks us to reevaluate long-held assumptions about who has the monopoly on good and evil.

The talking-head interviews with members of the church are consistently funny, touching and convincing in their articulation of their stand against the right-wing takeover of American discourse and society. Their sense of fun and puerile mischief is infectious – a particular highlight is a posthumous Satanic baptism on the deceased founder of the homophobic Westboro Baptist Church, fating her to be pleasured in the afterlife every time a same-sex couple kiss.

Hail Satan? begins by tracking the rise of the Satanic Temple from its faintly amateurish beginnings, when Malcolm Jarry decided to troll the Christian right by dressing up in devilish cloaks and publicly endorsing a Republican Governor. The modern version of Satanism has its roots in the movement founded by Anton Szandor LaVey in the 1960s. Archival footage portrays LaVey outfitted like a cut-price Ming the Merciless, replete with a high-collared, red and black cloak and ludicrous black widow’s peak. Boasting about reforming lost souls -“my friend came to me and told me was masturbating every day. Then he joined us and now he masturbates two or three times a day, it’s great!” – his wry smile revealing the mischief of an intelligent boy winding up the adults and getting away with it.

Back in the present, the Satanic Temple truly finds its cloven hooves with the arrival of Lucien Greaves, his detached, sartorial charm and ability for playing the media attracting legions of new followers and codifying the church’s mission and set of ethics. First on the agenda: going after the ten commandments tablet that erected at the Oklahoma State Capitol, despite the US’ constitutional separation of church and state and its tradition of religious plurality by petitioning for a twelve foot bronze sculpture of Baphomet to be erected alongside the tablets.

Late in the film, Jex Blackmore is effectively excommunicated for breaking their code of non-violence by invoking Donald Trump’s assassination. As she puts it, “there’s a sense of satisfaction at being too extreme for the Satanists”. As the organisation grows, so to must its policing of aberrant behaviour: a rather paradoxical position for a group of troublemakers. The irony, sadly, seems a little lost here, Lane faltering in her scrutiny of the developing hierarchies and hegemonic practices within the church. Nevertheless, the Temple’s antics are a hilarious middle finger to the establishment, while, their stand against hypocrisy and the Evangelical Right’s blatantly theocratic mission to take control of the levers of power feels vital.