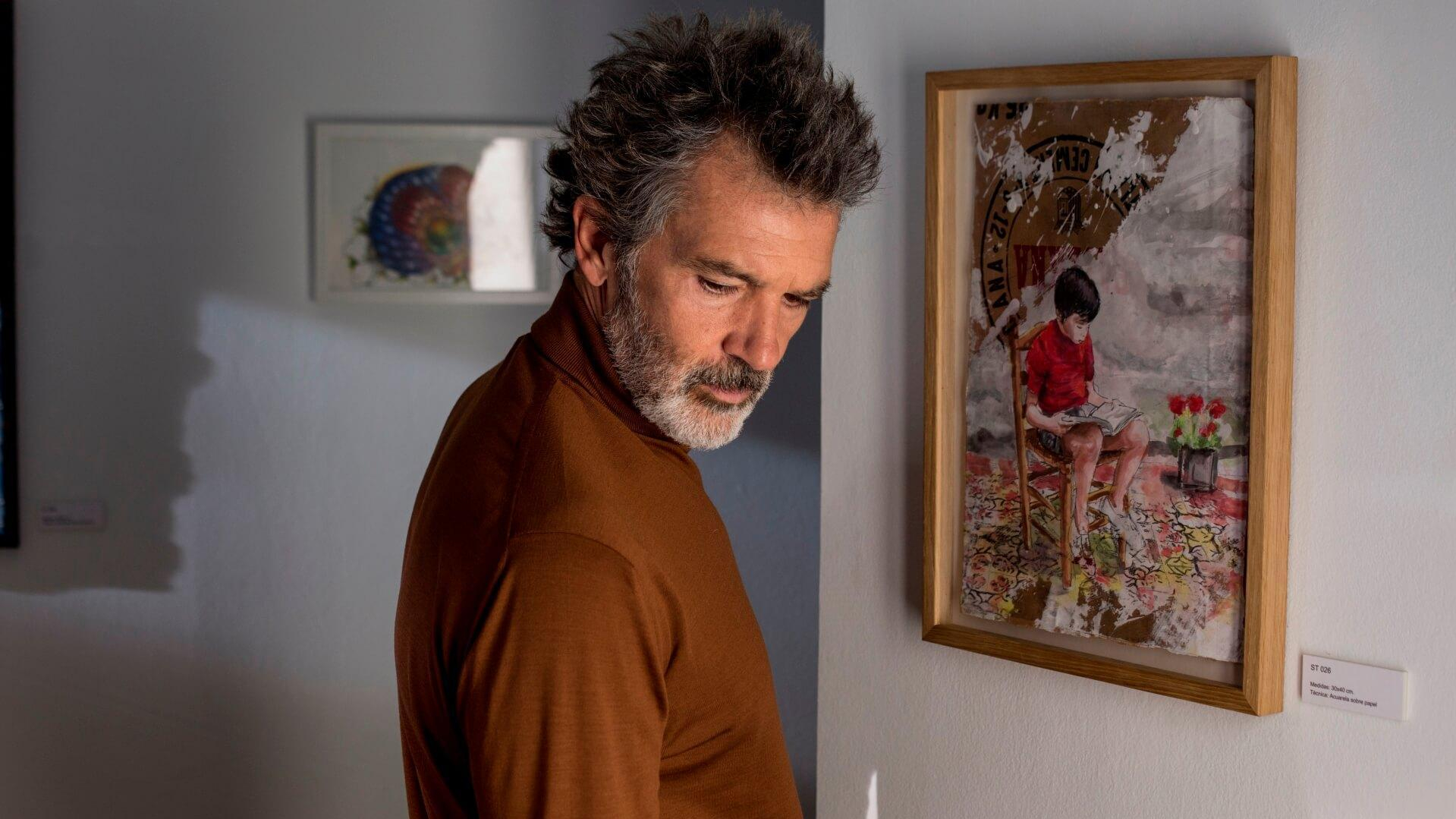 When director Salvador Mallo (Antonio Banderas) tells his estranged actor and friend Alberto (Asier Etxeandier), “It’s taken me thirty-two years to reconcile myself” with their final collaboration, what he’s really talking about is Pedro Almodóvar, director of the tender and affecting Pain and Glory, reconciling with the last forty five years as a filmmaker.

Salvador’s life has been one defined largely by physical pain. Suffering from childhood from an endless list of respiratory diseases, allergies and assorted maladies has ruined his body, scars streaking torso as a permanent record of a past full of strife. A chance meeting puts him back in touch with his old collaborator Alberto, who we are to learn became estranged from Salvador during the making of their last film due to his drug addiction.

Alberto hasn’t fully kicked his habit of smoking heroin, but it’s Salvador who is more at risk of falling into the lap of addiction. The pair’s newly-rediscovered amity is tested after a disastrous – and hilarious – drug-fuelled appearance at a screening of their old film but dulled by age and experience, their egos ultimately give way to forgiveness.  After sneaking a look at a confessional monologue on Salvador’s laptop as the director dozes in a post-heroin fug, Alberto convinces Salvador to let him perform the monologue as a one-man play, on the condition that Salvador is not credited as the writer.

As Alberto and Salvador rekindle their creative flame in the present, flashbacks gradually reveal Salvador’s childhood with his mother (Penelope Cruz) in their meagre, cave-like rural home. The present-day and flashback sequences are linked through a white and red colour scheme which dominates the film’s mise en scène. White is generally more abundant in the flashback sequences – the whitewashed walls of his childhood home, for instance. Yet the associations of white with his mother are complicated by the bleached heroin powder in Salvador’s present-day stash.

Perhaps the narcotics offer him a maternal comfort that his harsh, practical mother never did. Later, a wounded conversation with his elderly mother problematises the notion of the pristine, immutable past. Similarly, the scarlet red of his apartment signifies passion and sexuality, but also the pain of his lifelong illnesses. When Alberto performs on the same night that Salvador reconnects with an old flame, while we flashback to a key moment of childhood, the colour red suggests the sweet melancholy of memory as much as it does sexual revelation.

Pain and Glory’s exquisite pacing, its discovery of sexuality, relationship with the creative spirit and reconciliation with the past are about as Almodóvar as Almodóvar gets. It is also, undoubtedly, one of the director’s best works and among the best films of the year. As a semi-autobiographical piece about a master European filmmaker reflecting on his career, comparisons have understandably been drawn with Fellini, the self-reflexive Italian director par excellence. But where 8 1/2 is about self-conscious creative doubt, Pain and Glory is a study of acceptance, revelation and reconciliation; it is about cinema’s relationship with the past and its power to reshape and cohere memory as a means of coming to terms with it.