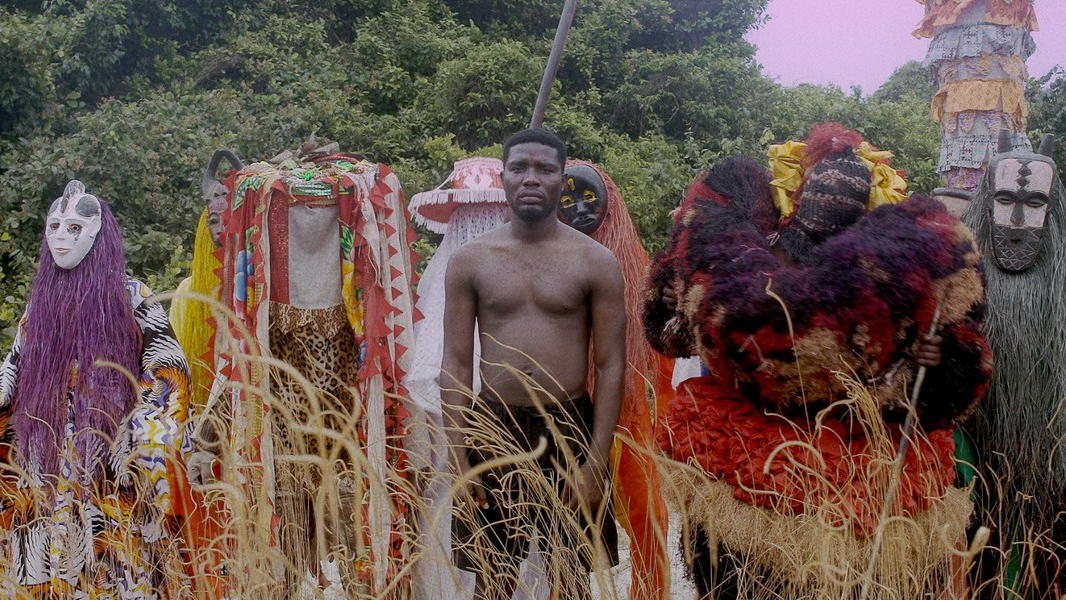 Following his 2016 debut Green White Green, Nigerian director Abba Makama returns to the festival circuit with this exploration of heritage, culture and folk memory, seasoned with endearing, offbeat humour and a touch of body horror. The Lost Okoroshi follows the travails of carefree security guard Raymond (Seun Ajayi) as he awakes one morning to find himself transformed into a traditional masquerade spirit.

Raymond lives a fairly modest life. Sharing a small room with his wife (Judith Audu) and a television set permanently tuned to static, Raymond rides to work every day on the back of his friend’s motorcycle. Admonished daily by his boss for his tardiness, Raymond nevertheless seems to live a trouble-free existence. That is until he falls asleep when he is tormented nightly by dreams of being chased by strange, mask-wearing spirits. Every night the same dream: the spirits perform a dance before one of them chases him, grasping at his shoulder. Each morning he wakes just before the moment that the spirit catches him.

There’s an invigorating gonzo style to these early sequences; shot on digital video and largely in the confined spaces of Raymond’s room and his security desk, there is an ostensibly mundane quality to the images. Yet Makama’s vivacious sense of humour brings them to life. Small touches like Raymond’s TV being left on overnight suggests the liminal boundary between the physical world and the ethereal, while Ajayi’s shaggy chemistry with his co-stars plays perfectly with the comic editing of his daily routine.

As his nightmares increasingly intrude into Raymond’s daily life, his older friend (Chiwetalu Agu) warns that society is forgetting the old ways of life. Claiming that a wound on his leg won’t heal because the potency of his natural herb remedy is waning, he blames modern urban life for draining the power of the life spirits. Instead of running from the spirit, he advises Raymond, he should turn and embrace it.

This is a piece of advice that Raymond will come to regret – the next time he dreams of the spirit, he follows his friend’s suggestion, only to awake to find himself transformed into the greatest of the masquerades, the Okoroshi. The scene where his poor, terrified wife screams for her husband only to realise that the weird creature in front of her is Raymond, is hilarious and tragic in equal measure. His wife dragging him to hospital and then begging his boss to let him come to work brilliantly illustrates the clash between the mundane and the extraordinary; awe quickly gives way to acceptance.

Raymond-Okoroshi’s associations with a cast of likely chancers; a prostitute, a young entrepreneur and a militant group of masquerade worshippers all illustrate the ways that heritage is appropriated, exploited and reshaped into new forms. Indeed The Lost Okoroshi’s incongruous mash-up of cultural influence, its use pop music, vibrant colours and cinematic visual effects underscore this idea, making a serious point about the appropriation of cultural heritage by interest groups and the spiritual cost of collective folk-memory loss.