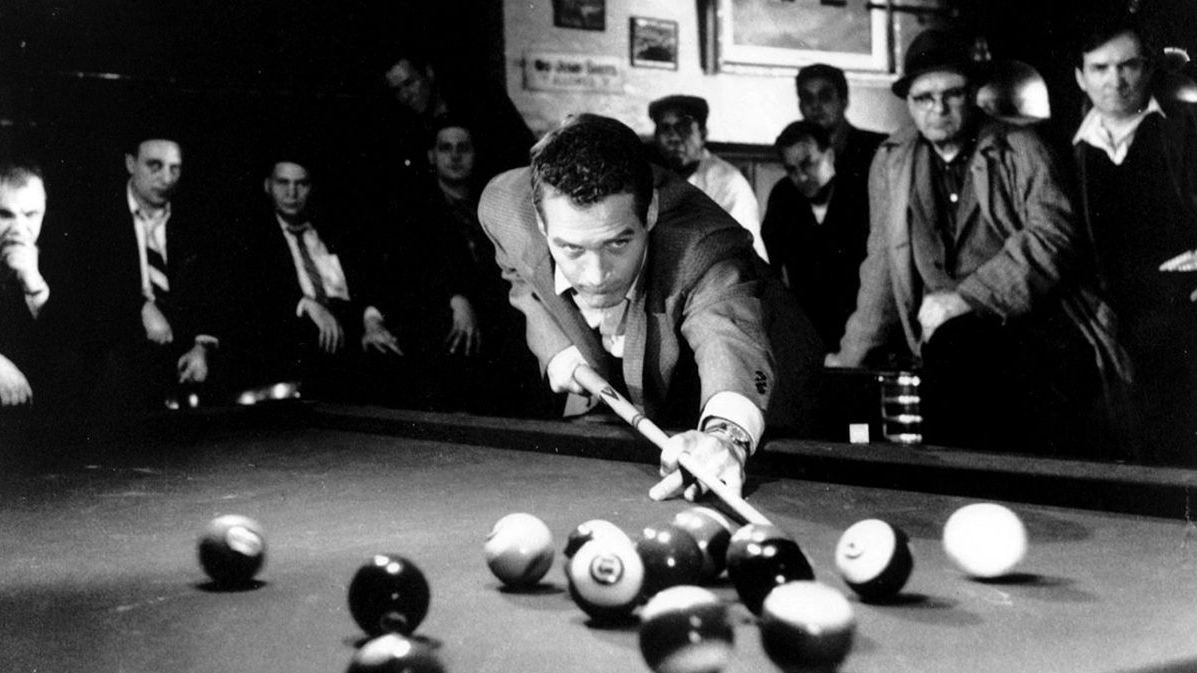 Throughout Hollywood history, there’s been a lot of characters who love a flutter in one form or another. Whether slick professionals, hopeless addicts, or a mixture of the two, their stories can make for hard watching at times – in keeping with the visceral nature of their chosen pastime.

These individuals are often highly charismatic, intelligent but flawed people, giving them a magnetic screen presence. Here are some of the best, or in fact worst, on-screen gamblers of all time.

Fast Eddie – The Hustler
Released in 1959, Hollywood royalty Paul Newman portrays an up and coming pool hustler called Fast Eddie Felson. Whilst undoubtedly possessing a lot of natural talent, he also has the ego to match, and this plays a major part in his story. Based on the book by Walter Tevis and directed by the legendary Robert Rossen (All the King’s Men), it’s a slick portrayal of the “perverted, twisted, and crippled” world of pool hall hustlers at their despicable best and catapulted Newman in the very the top tier of great actors.

Eddy – Lock, Stock, and Two Smoking Barrels
Another natural gambler also called Eddy, this man’s speciality is ‘making cards invisible’. Such is his prodigious talent that he convinces his friends to foot him the buy-in for a high-stakes game of ‘three card brag’ with the promise of big profits. Little does he know that his opponents are crooked as the sickle on the USSR flag. A variety of capers ensue, some better conceived than others. This is Guy Richie’s breakthrough movie and also features Jason Statham and Sting, an iconic British classic that, like The Italian Job, ends in a cliffhanger we’ll never know the outcome of.

James Bond – Casino Royale
When most people play poker they’re not saddled with the added pressure of saving the world from the designs of evil supervillains à la Le Chiffre. But, this James Bond after all, and he gets little help from his American counterpart and femme fatale played by Eva Green. As well as high stakes poker games, Bond is a capable baccarat player, so an Irish casino for players over 18 may well be a good place for him to try.

Ben Campbell – 21
A maths whizz from MIT finds himself in need of some cash and gets recruited to a team of his peers, also maths whizzes, who, led by their professor (Kevin Spacey), head to Vegas to knock off casinos at – you guessed it – blackjack. Whilst many, critics and moviegoers alike, didn’t consider this to be a great movie, you can’t deny that Ben and his team are a gifted bunch. This is at least when it comes to the technical side of things, beyond that they’re a tad naive.

Rusty Ryan – Ocean’s 11
Steven Soderbergh’s slick heist movie starts with Rusty, played by Brad Pitt, apparently teaching a load of celebrities how to win at poker. His first piece of advice is to “always leave emotion at the door”, something his long time conspirator, Danny, could well do with taking later on in the movie. Ultimately, Rusty cheats the celebs that he’s supposed to be helping, so caution to take his advice with a large pinch of salt, but it’s entertaining nonetheless.

Raymond Babbit – Rain Man
Ah, the great American late eighties/nineties comedy-drama. In this one, Raymond Babbit (played by Dustin Hoffman) is manipulated by his unscrupulous brother, Charlie (Tom Cruise) to use his incredible memory powers to count cards at a casino. Unlike everyone on this list, he’s a man with absolutely no interest in gambling or money, but he’s so effective he even gets a mention in the song Rain Man by rapper Eminem.