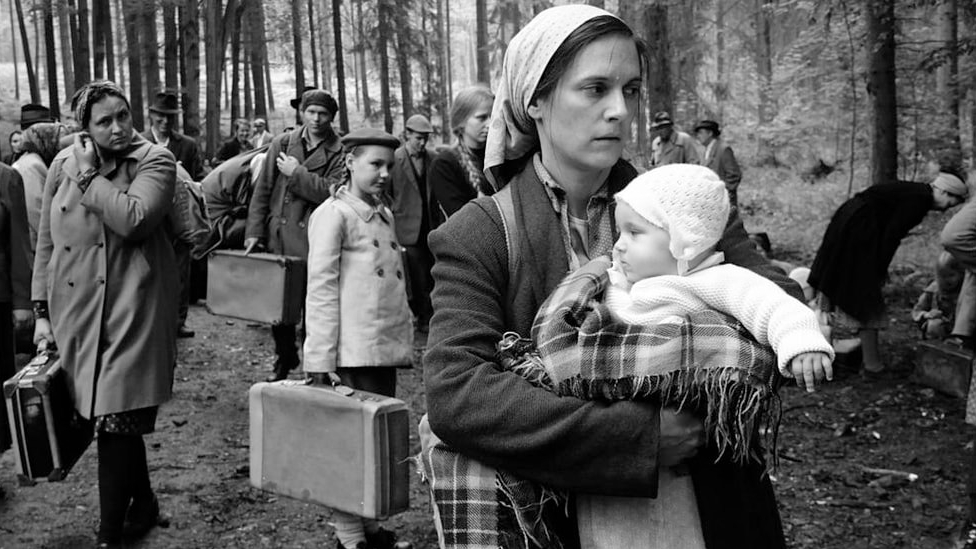 Set in a small village on the Czech-Austrian border, and spanning fifteen years pre, during and post-Second World War, Bohdan Sláma’s Shadow Country is a monumental piece of filmmaking. Simultaneously an historical allegory of tremendous scope and a claustrophobic, cautionary tale of collaboration and bloody revenge, it is both epic in scale and intimate in character detail.

“Who are we and where do we belong?” ask intertitles in the film’s opening moments. An expansive question, certainly, and one which Shadow Country explores with far more than existential musing. Spurred by a past of troubled identity, this interrogation has potentially grave consequences in the present and even worse for an unknown future. The people of Vitorazsko, a disputed hinterland passed for centuries between Austria and Czechoslovakia which would be annexed and occupied by the Nazis during the conflict, are those in search of an answer.

And though our first meeting with the villagers of Tušť is a joyous one – the christening of Karel (Stanislav Majer) and Veberova’s (Magdaléna Borová) son – divisions of opinion and national identity soon surface. There are those for an old Soviet newsreel and those against, those that want a swastika to be displayed in the square and those that tear it down. It is 1938 and in the gathering storm of war many of the townspeople are sleepwalking into a Nazi regime. As we move into 1939, swastikas are seen flying freely, are sown onto armbands, Hitler’s image is hung on a wall and ‘Jew’ is graffitied on the shutters of the Stein family shop.

An allegiance to either Germany or Czechoslovakia is the decision to be made and the apathy of saying “It’s none of our business,” defies any notion of truly loving, and protecting, thy neighbour. When Josef (Csongor Kassai), one of few actively resisting the decline to fascism, is denounced, tarred and feathered, the horrified reaction of those who find him shows that their new reality is beginning to resonate. A bump in the score marks the seeds of discord taking root and begs the question: what will you do now, how will you react to what you see happening in front of your own eyes?

Cinematographer Divis Marek’s crisp black and white, wide-frame photography, extensive use of long takes and a great depth of field does not leave anywhere to hide for characters caught between self-preservation, principle, and in some instances the chance to profiteer from the persecution of others. And yet for the first half of Shadow Country, but for the return of one young volunteer who has lost a leg, and diminishing supplies of food, the war happens – and then ends – elsewhere. We never leave the isolated village, trapped in ignorance and self-delusion. But will the void left upon the conflict’s conclusion be any better, or even worse, than what came before?

Brutal, vindictive bloodletting in the name of revolution will have a devastating effect on the community. Sláma’s patient, but well-paced, unveiling of Ivan Arsenyev’s script shows just how easily any person can be corrupted by power and prejudice when circumstances permit. Shadow Country is gruelling, unrelenting cinema, and yet another reminder that many wrongs never do make a right. Saying so with hindsight, rather than foresight, will not prevent history repeating itself once more.