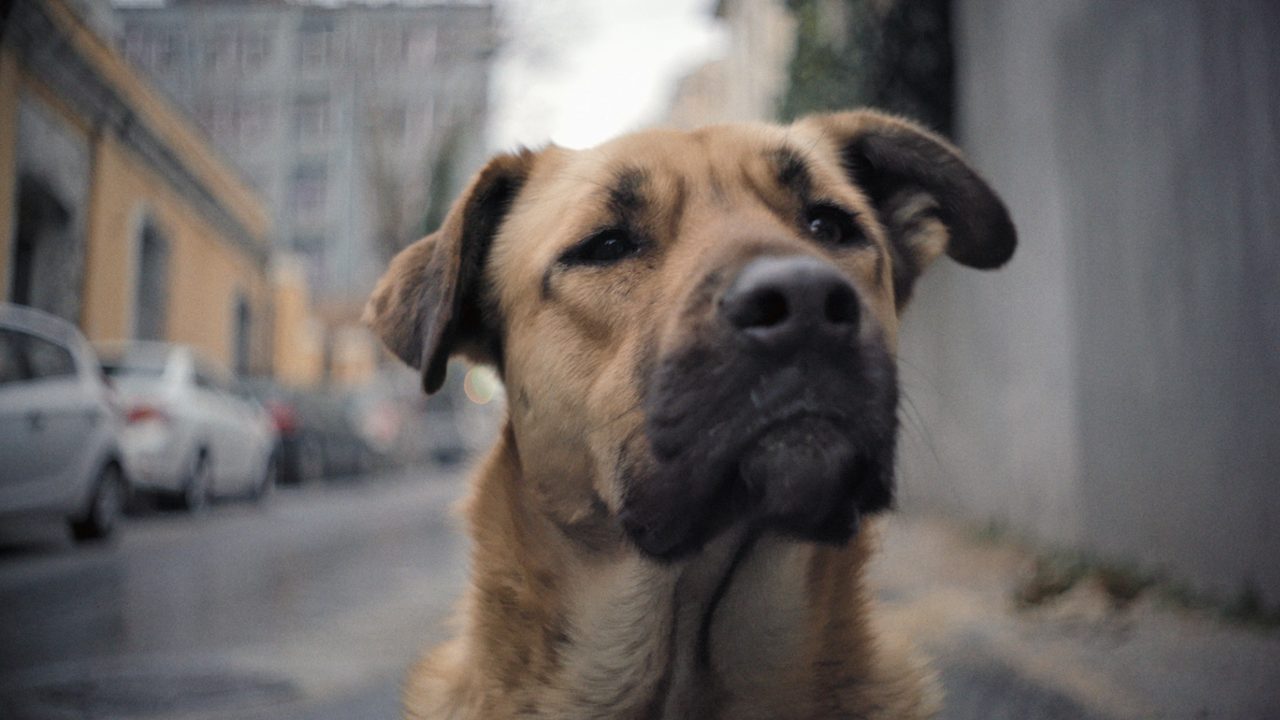 The saying goes that in the movies you should never work with children or animals. Acclaimed documentary short filmmaker Elizabeth Lo proves the latter part of this old adage to be complete nonsense with her feature debut, Stray.

Following the freewheeling day to day life of dogs living on the streets of Istanbul, the initial novelty and intrigue of this extraordinary documentary broadens further to a profound meditation on how mankind treats our so-called best friends, and one another.

‘Human beings live artificially and hypocritically and would do well to study the dog.’ Citing the words of Diogenes, and thankfully paying no heed to those of W. C. Fields, Lo opens her film with a philosophical flourish. It’s a high brow beginning that is followed by a close up of one particular dog’s hind legs and rear end. It is Zeytin, whose expressive brown eyes, dancing eyebrows, gentle confidence and ferocious displays of strength when necessary that will be our vehicle, our point of view in this new world.

She is the canine we will study for just over 70 minutes in order to learn how to better live less artificially and hypocritically. Not convinced? You will be by the end. With a running time as lean and nimble as she is, we hit the ground running with Zeytin, cross roads, play fight with pals, have more serious fights with others, chase cats, sniff bins for food, nap and stretch. It is an immersive, all-encompassing sensory experience and Lo’s ground-level, intimate camerawork (she takes production and editing credits as well) is extremely accomplished.

Perhaps thanks to Zeytin’s daily interactions with so many unknown humans, the closeness and comfortability that Lo garners from her canine leading lady is quite incredible to behold. Far from a threat to the filmmaker or any of Lo’s fellow species, it is human kind’s projection of stereotypes regarding stray dogs that sours this urban playground. And in spite of a swell of strings, surge of action and positive energy when Zeytin, her pal Nazar and others coincide with a group of lads who care for them, the treatment the whole gang receives at the hands of others is callous.

Taking shelter from the rain in a building site, huddled together for warmth, we will later learn that these young men are Syrian refugees and like their canine counterparts have been outcast to the margins of society and must look after themselves as best they can. Complaining of a lack of assistance from the government to process applications, and struggling to find food and shelter, the boys sniff glue to take the edge off sleeping rough. But caring for Zeytin, and later Kartal – a black and white pup they steal from near the beach, gives them purpose and a chance of affection amid such a harsh existence.

‘The state has launched campaign after campaign to drive dogs from the streets, but still they roam free.’ The last of a number of intertitles comes from Turkish writer Orhan Pamuk. Outraged at the authorities’ persistent attempts to rid Istanbul of stray dogs, the people of the city protested to prevent this from happening. Yet, the suffering and desperate need of Syrian boys is ignored, and they are arrested for sleeping rough. Our care for one species and inhumane treatment of the other hangs in the air like fog as Stray draws to a close. Hearing a distant call to prayer, Zeytin answers with a repeated mournful howl. Study the dog we should, as we might just learn something.

Stray is in virtual cinema and on demand from 26 March. stray-film.co.uk