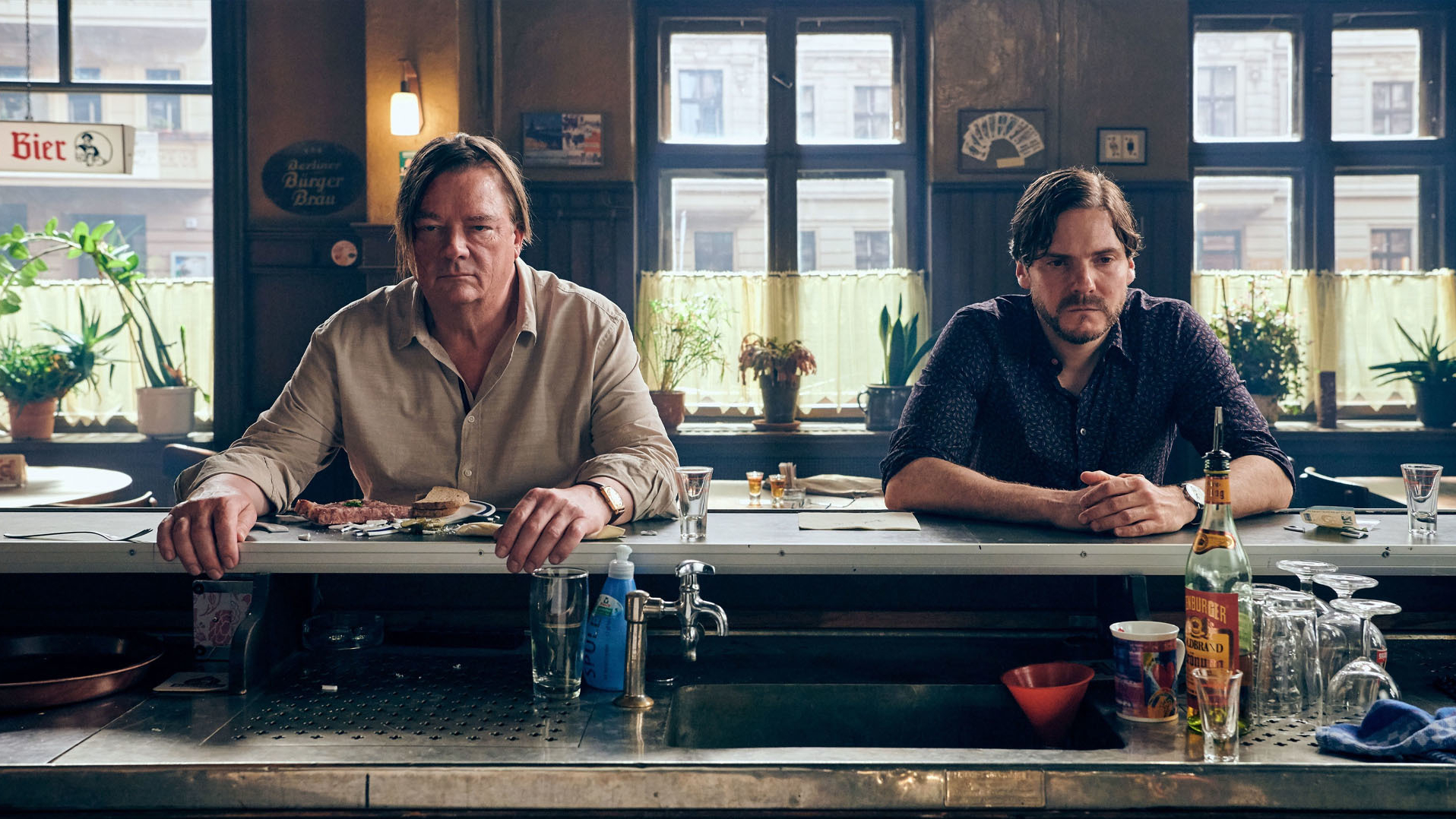 In Next Door, the director-star may be playing a version of himself – replete with an upcoming part in a pulpy American blockbuster – but this is far from a vanity project for Brühl, gradually unravelling his protagonist’s cockiness until his life is in tatters and career in jeopardy. Next Door functions both as cautionary tale against hubris, and as a gripping quasi-chamber piece, built from the ground up by a tight, engaging screenplay by Daniel Kehlmann.

After a brief prologue in Daniel’s Berlin apartment, establishing that he has a flight that afternoon for an important casting call in London, almost all of the action takes place in a bar that Daniel stops in before heading to the airport. Soon after arriving, he notices a middle aged man staring at him. Daniel assumes that he wants an autograph, but the man seems more interested in offering him acting tips, before revealing himself as Bruno, his neighbour.

Irritated, Daniel goes to leave, before the man starts dropping private details about his life. Like a nightmare from which he can’t quite rouse, each of Daniel’s attempts to extricate himself is met with another detail that pulls him back into an ever-decreasing spiral of intrigue. From the moment that he walks in to that bar, we know as well as Daniel that he is never going to get on his flight.

Just as the proverbial noose tightens around Daniel’s neck, the cinematic space seems to constrict, too. Where Daniel’s apartment is bright and airy, dominated by a sickly teal and orange colour scheme , the bar is dark and oppressive, its windows grimy and oaken furniture inert. Brief moments of respite, such as one sequence where it seems like Daniel might actually get away in a taxi, are swiftly retracted as Daniel fails to resist the spiralling, gravitational pull of the Pandora’s box waiting for him.

Crucially, we are never quite sure of Bruno’s motivations. Does he have a pathological commitment to the truth, or like Iago, is he simply an agent of chaos, revelling in undoing the great and the good? Any such motives are irrelevant against the irresistible thread on which Daniel is compelled to pull, and which will invariably be his unravelling.

The brilliance of the film is that in the relative privacy of the bar, Bruno does not expose Daniel’s misdeeds to the press or the wider public. Indeed, at any time Daniel could walk away and get on that plane. Bruno’s goal is not to destroy Daniel from without, but only to expose him to himself. His performative hubris is slowly stripped from him, revealing not his true self, but a hole where his ego should be; the mask has slipped but there is nothing behind it.